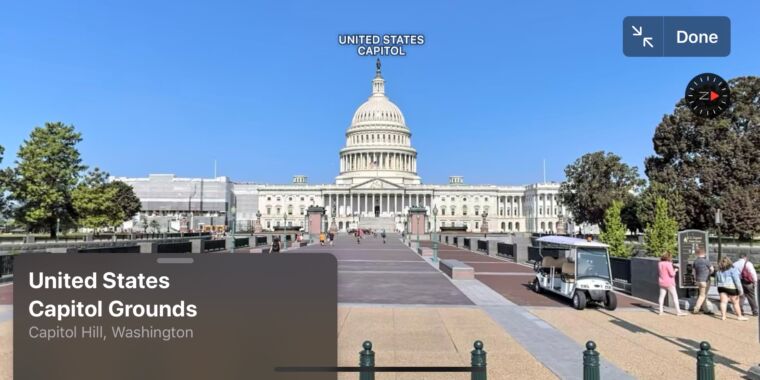 Apple Maps has been slowly expanding regional coverage for its Google Street View-like Look Around feature, and now MacRumors forum members have spotted rollouts for the feature in the US cities of Philadelphia, Boston, and Washington DC.

Look Around was added as a feature in iOS 13 last September, but it launched with coverage only in or near San Francisco. Like Google Street View, the feature allows users to zoom in to street-level photography of most streets in an urban area. Apple displays Yelp listings and other data on real-world buildings and monuments in the viewport when Look Around is displayed in full screen.

Generally, we have observed that the resolution and quality of the photography is better than what we’ve usually seen in Google’s version, and Apple applies some slick animations and parallax effects to make the view more immersive and natural-looking.

We first took a gander at Look Around in our in-depth iOS 13 review, where we also took an opportunity to re-assess Apple Maps. The verdict we came to then was that Apple Maps is becoming much more competitive with leader Google Maps in many parts of the United States but that it still lags far behind the competition in most other regions. And we named lack of robust Look Around coverage as a key disadvantage compared to Google, with its very built-out Street View.

At the time of the review, Apple had also begun the process of rolling out much more detailed maps in certain parts of the States, like California. Between then and now, Apple has completed that rollout across the United States.

Look Around is coming more slowly than the updated maps, though. Since our initial review, Look Around has been added to some other US cities. As far as we can tell, these are the cities that have Look Around as of today:

Obviously, many other major US urban centers like Chicago, Seattle, and Atlanta still don’t have this feature, and that’s to say nothing of Europe, Asia, Latin America, the Middle East, Africa, Oceania, or any other regions that may be priorities for Apple. Presumably, they will come with time, but Apple hasn’t published a specific timeline. So far, users have simply been surprised to see support added in their areas.

Look Around is available on devices running the latest versions of iOS and iPadOS, but it has not yet arrived on macOS.

Jimmy Iovine announces Apple Music in 2015. For months, we’ve seen reports and rumors that Apple is on the brink of introducing its own answer to Amazon Prime: a bundled subscription service that would offer users access to Apple Music, Apple TV+, and Apple News+ for one flat fee. But a new article providing details […]

Enlarge / Sidewalk Labs concept for the scuppered lakefront development in Toronto. Sidewalk Labs When Google sibling Sidewalk Labs announced in 2017 a $ 50 million investment into a project to redevelop a portion of Toronto’s waterfront, it seemed almost too good to be true. Someday soon, Sidewalk Labs promised, Torontonians would live and work […]