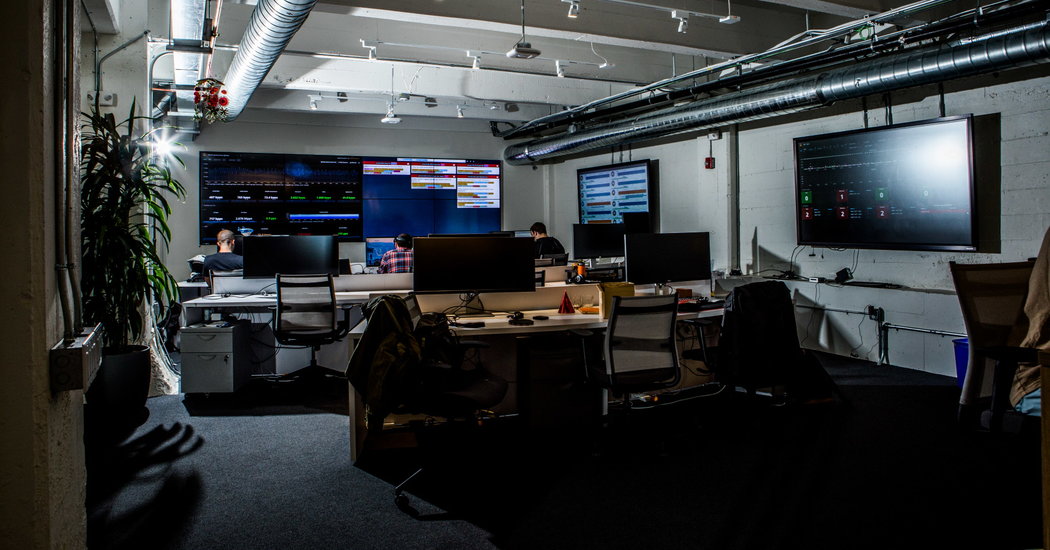 SAN FRANCISCO — Even before 8chan, the anonymous message board, went dark early on Monday morning, the scramble to keep the site online had begun.

The message board, which had hosted the anti-immigrant manifesto of the man accused of the El Paso shooting and the hateful messages of other attackers, had gone down after Cloudflare, a security company, decided it would no longer provide it with its services. That left 8chan vulnerable to cyberattacks that could knock it offline. Another internet firm, Tucows, which helps companies register their web addresses, also pulled its support for 8chan on Monday, leaving the message board without a functioning web address.

[Why banning 8chan was so hard for Cloudflare.]

To stay online, 8chan’s administrators raced to find alternatives. They went to Epik, a technology company that could help the site register its web address again. Epik’s subsidiary, BitMitigate, could also protect it from cyberattacks, an 8chan administrator said in a tweet.

After 8chan migrated to Epik and BitMitigate, the site flickered back online in some regions. But its return was brief. Voxility, a company that provides computing services to Epik, was criticized by internet executives for indirectly helping to keep 8chan on the web. In response, Voxility severed its relationship with Epik, taking BitMitigate offline in the process — and making 8chan go down again.

The behind-the-scenes digital domino effect illustrates how websites like 8chan rely on a complex network of internet infrastructure companies that are unseen by most people but are crucial to keeping these sites around. Dozens of these companies, which are often small and privately owned, provide web addresses, cloud computing power and other basic mechanisms that websites need to exist. Without the backing of these companies, 8chan has limited options for survival.

“Some of the biggest service providers of the internet on the planet are generally completely unknown to the average user,” said Tarah Wheeler, a cybersecurity policy fellow at New America, a public policy think tank. She said the infrastructure companies enabled sites of all kinds to be quickly and easily accessible at a low cost.

A version of 8chan was still available on Monday afternoon on the so-called dark web, the home of many illegal websites.

[8chan is a megaphone for gunmen. “Shut the site down,” says its creator.]

Bad actors have thrived on the dark web because the technology allows website owners and visitors to obscure their location and internet address, making it harder for law enforcement to find them. The dark web version of 8chan, which was surfaced by the intelligence firm Terbium Labs has the site’s familiar battle cry across the top: “Embrace infamy.” The top headlines on Monday afternoon were all about the weekend shootings in El Paso and Dayton, Ohio.

But even on the dark web, companies need service providers to keep their sites up reliably. And the 8chan site was only intermittently available and slow to load, making it nearly impossible to click on the site’s links.

Ronald Watkins, an administrator for 8chan, said on Twitter on Monday afternoon that he would wait to see if BitMitigate would be able to restore its services. If not, 8chan would try to get online again anyway, he wrote. Mr. Watkins is the son of Jim Watkins, the owner of 8chan. As of 6 p.m., the message board remained offline.

Rob Monster, the chief executive of Epik, said in an email that he had not solicited 8chan’s business and had not decided whether to keep the site as a customer.

“Our services fill the ever growing need for a neutral service provider that will not arbitrarily terminate accounts based on social or political pressure,” he said. “Our philosophy is, if the customer is not breaking the law, providers of technology should apply discernment in determining whether or not to service.”

At Voxility, Maria Sirbu, the vice president of business development, said it would not work with Epik or BitMitigate again even if those companies ended their relationships with 8chan. “We’re totally against hate speech,” she said. “We are free to terminate the service as we like.”

The internet infrastructure companies have distanced themselves from toxic websites before. In 2017, The Daily Stormer, a neo-Nazi forum, was booted off Cloudflare after the site mocked Heather Heyer, a woman who was killed during a white nationalist rally in Charlottesville, Va.

The Daily Stormer initially struggled to find companies that would provide the infrastructure it needed to remain online. BitMitigate, which says its services come with “a proven commitment to liberty,” and Epik eventually stepped in to protect it. The Daily Stormer now uses dark web services and overseas hosting providers to stay afloat. But it went offline on Monday after Voxility terminated its business with Epik.

8chan is in an even more delicate position than The Daily Stormer because it appears to help mass killers by providing them with a place to air and spread their violent and often racist messages. Other recent shootings — including at mosques in Christchurch, New Zealand, and at a synagogue in Poway, Calif. — were all announced on 8chan before they began. Over the weekend, even one of 8chan’s own founders, Fredrick Brennan, disavowed the online message board, saying, “Shut the site down.”

Nick Lim, the founder of BitMitigate, who left the company in May, said he expected 8chan to emerge elsewhere on the internet. The message board could tap other infrastructure and hosting providers for services, experts have said.

“I don’t think cutting off BitMitigate and Epik is something that will remove hate from the internet, rather I think it will only push it elsewhere,” Mr. Lim said in a text message.

But Alex Stamos, a former Facebook executive who is now the director of the Stanford Internet Observatory, which researches abuses of information technology, said 8chan could ultimately be marginalized, even when it returns online.

“We started down the path where 8chan is going to end up in the same place that spammers end up,” said Mr. Stamos. “What you are seeing here is infrastructure companies treating the worst, most vile hate speech like they treat spammers.”

Infrastructure companies have long banned spam, malware and other malicious content, and providers of this content have been pushed to overseas hosts, primarily in Russia and Ukraine, or to the dark web, he said. 8chan could follow the same route.

“It will be much slower and less reliable, but they’ll still exist,” Mr. Stamos said.

Christophe Morin/IP3/Getty Images Some lawmakers have spoken out about Facebook’s plans to partially merge WhatsApp, Messenger, and Instagram. The social network plans to combine the back-end systems of the three apps, so users can talk to each other across platforms. But the move has faced early skepticism from some politicians, with concerns raised around data […]

SAN FRANCISCO — Uber, the ride-hailing service that has upended transportation around the world, took a major step toward the largest initial public offering in years when it officially unveiled its finances in a prospectus on Thursday. The offering, which could value Uber at around $ 100 billion, is expected to reverberate through global financial […]