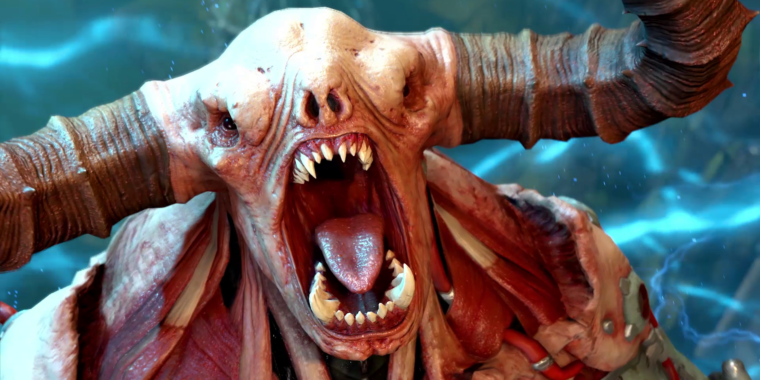 Doom Eternal—the highly anticipated sequel to the hell-shooter series’ 2016 reboot—has left our list of most anticipated games of 2019. On Tuesday morning, game publisher Bethesda announced that Doom Eternal needs another four months in the oven. That means it will launch on PC, Xbox One, and PlayStation 4 on March 20, 2020.

That list of supported platforms is missing a big name: Nintendo Switch. Tuesday’s delay includes an additional, indefinite delay of the sequel’s port to Nintendo’s weaker console, thus breaking the developer’s original promise that Switch buyers would get to rip and tear into Doom Eternal the same day as everyone else. “We will announce [the Switch port’s] date in the future,” the company’s statement vaguely reads.

Publisher Bethesda took the opportunity to delay another related game out of November 2019, as well: Doom 64. This first-ever port of the 1997 shooter onto non-N64 platforms is still coming to PC and modern consoles, Bethesda says, but it, too, will launch on March 20, 2020. Now, at least, that port will become a free pre-order bonus for buyers of Doom Eternal. But we’re not sure why Bethesda and id Software couldn’t get Doom 64 ready by this holiday season to tide series fans over during the bigger game’s delay. (In the meantime, if you own a legitimate copy of the N64 original, we suggest ripping its files and launching them on PC via the incredible Doom 64 EX mod.)

The scope of the delay seems substantial, as the entire game won’t even be ready by March 2020, according to today’s statement. The new game’s “Invasion Mode,” which lets online players become the bad guys in other real players’ single-player campaigns, will be delayed as “a free update shortly after launch.” id Software isn’t saying exactly how “shortly” that will be.

This delay is a particular bummer, considering how polished Doom Eternal‘s gameplay world premiere felt at a pre-E3 event this summer. As I wrote:

I don’t often get as jazzed about an in-development video game the way I have about Doom Eternal. After playing its 20-minute E3 demo to completion for my first time, I yelled, “AGAIN! AGAIN!” like a child unwilling to get off of a rollercoaster (and was thankfully granted another go at the fun). Upon getting home and preparing this article before Bethesda’s E3 press conference, I combed through a full playthrough video provided by the developers like a sad ex flipping through a photo album. I had to look again. I wanted to remember.

I guess I’ll have to watch those old video clips for another few months to wait out this return of the game. Here’s to hoping the delay helps id Software fulfill the demo’s promise: more of the same Doom 2016 action, only with more open skies, fewer claustrophobic corridors, and a perfectly ramped-up combination of new monsters and new weapons alike.

If you’re keeping score, Doom Eternal joins a high-profile list of games originally promised to launch in 2019. These include Animal Crossing: New Horizons, Wasteland 3, and Psychonauts 2. (We’re still wondering whether Valve will join that list with its repeatedly promised “VR game,” currently slated to launch in “2019.”)

Even though it’s not a game, you’re also welcome to add the upcoming Sonic the Hedgehog film onto that list. It, too, received a high-profile delay into 2020 after an outcry over its premiere live-action trailer earlier this year.

Everything you need to know about Nintendo Switch Online

It took more than a year after launch, but the Nintendo Switch received its online service in September 2018. Nintendo Switch Online is comparable to PlayStation Plus and Xbox Live in that its primary function is to grant access to online multiplayer. A subscription to the service also gets you a library of classic NES […]

We all want to be recognized. Whether you’re a marketer or a professional athlete – whether the job is running ads or running routes in NFL stadiums — we all want to put our best foot forward. We put in work, and we want that work to get noticed. Then again, no one gives much […]

The video game industry hasn’t designed many games specifically for girls, but Star Stable has proven to be one of them with staying power. Stockholm-based Star Stable Entertainment broke a lot of rules when it launched a massively multiplayer online game in 2012. It created its online horse game, Star Stable, for girls and young women. It charged […]

How to gameshare on your Nintendo Switch

How Fujifilm instant cameras are helping patients and nurses to connect