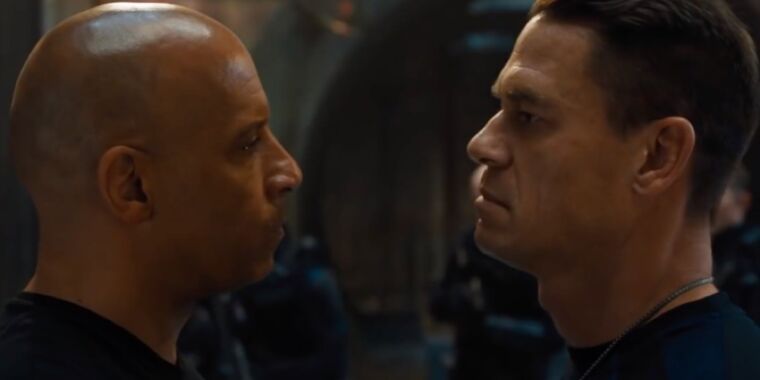 Universal Pictures has dropped the first full trailer for Fast and Furious 9, the latest installment in its multibillion-dollar franchise. It’s nearly four full minutes of all the ridiculously over-the-top mayhem we’ve come to expect from Domininc Toretto (Vin Diesel) and his merry band of badass misfits. And no wonder: Director Justin Lin is back on board, who helmed 2006’s Tokyo Drift and the next three installments before passing the baton to James Wan for Furious 7.

Fast and Furious 9 is the sequel to 2017’s The Fate of the Furious, in which Dom is coerced into following the orders of a cyberterrorist named Cipher (Charlize Theron). Over the course of a very convoluted plot, Dom discovers that his former lover, DSS agent Elena Neves (Elsa Pataky) bore him a son. Elena doesn’t survive the film, but the boy does. And of course, Dom and company end up saving the day.

News of a planned ninth and 10th film to complete the franchise broke back in 2016, with F&F9 initially slated for an April 2019 release. It was rescheduled for this year to make room for the 2019 spinoff film, Hobbs and Shaw, starring Dwayne Johnson and Jason Stratham in the title roles. There were already rumors of tension between Johnson and Diesel on the set of The Fate of the Furious, and the delay on the ninth film prompted a bitter outburst on Instagram by co-star Tyrese Gibson, who plays team member Roman Pearce in the franchise.

This ninth installment pits Dom and his crew against a master thief, assassin, and high-performance driver who just happens to be Dom’s younger brother, Jakob (John Cena). As the trailer opens, we see Dom living a quiet, bucolic existence, raising his son Brian with his wife Letty’s (Michelle Rodriguez) help. “I used to live my life a quarter mile at a time,” he says in a voiceover. “But things change. I’m a father now.” Alas, things are not going to remain peaceful for long: “No matter how fast you are, no one outruns their past. And mine just caught up to me.”

And who is egging Jakob on? None other than F&F8‘s criminal mastermind Cipher. She wants revenge after Dom foiled her original plans and assures Jakob that he is smarter and stronger than Dom—although she wonders if Jakob could ever bring himself to kill his older brother, which she, of course, is more than willing to do. We get a glimpse of Magdalene Shaw (Helen Mirren), mother to Deckard and Owen, who offers some pearls of wisdom. “There’s nothing more powerful than the love of family,” she says. “But you turn that into anger and there’s nothing more dangerous.”

Naturally, there is all manner of property damage, fisticuffs, and death-defying leaps as well as plenty of high-speed car chases and explosions, because that’s what this franchise is ultimately all about: the characters and the amazing stunts. We also get a Pontiac Fiero outfitted with a rocket engine and a “magnet plane” piloted by Cipher. As one last surprise, we see Han Lue (Sung Kang) greet his former colleagues. He was supposedly killed by Shaw in Tokyo Drift. [Clarification: Han Lue did appear in subsequent films: 2009’s Fast & Furious, Fast Five (2011), and Fast & Furious 6 (2013), all of which were set chronologically before Tokyo Drift. 2015’s Furious 7 picks up where Tokyo Drift left off and depicts Han’s funeral. From a chronological standpoint within the franchise timeline, Han has been presumed dead since then.]

Let’s face it: plot has never been the franchise’s strong suit. F&F9 will probably make about as much sense as its predecessors—in other words, not much sense at all. And fans wouldn’t have it any other way.

Enlarge / This cute little Switch controller won’t work with your cute little Switch game library; only downloadable NES classics will be supported. I’ve been on record for years now in my position that the Nintendo Switch Joy-Cons are “hand-crampingly small” when being held horizontally, NES-controller style, by adult-sized hands. So I was hopeful that […]

LAS VEGAS—NBA Jam came out 26 years ago, and it (and especially its Tournament Edition sequel) stands as one of the best sports video games ever made. It was a classic in arcades, and it was a classic on the Super Nintendo and Sega Genesis. Now, thanks to Arcade1Up, it can be a classic in […]

6 Games You’ll Want to Buy in May

Punch Japanese gangsters, race with blue hedgehogs, or conquer China with these hot upcoming titles. PCMag reviews products independently, but we may earn affiliate commissions from buying links on this page. Terms of use. So begins the summer video game lull, where the flood of triple-A game releases slows to a mere stream, as publishers […]