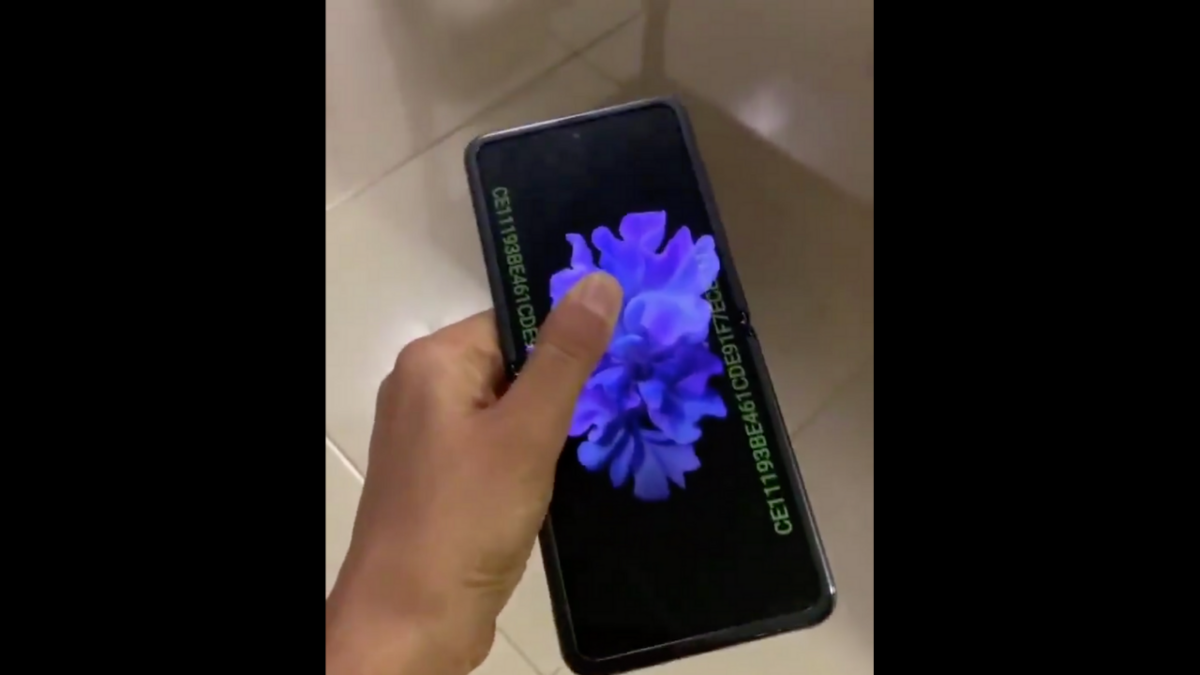 Samsung will reveal the Galaxy Z Flip later this month, but you don’t need to wait until its Unpacked event to see the upcoming foldable phone in action. Today, we’re getting an early look at the clamshell-style smartphone due out within the next few weeks. In a video posted online by an unidentified source, the Galaxy Z Flip appears in all its glory. Now, there’s little left to the imagination ahead of the official launch.

The leak starts out with an exterior shot. When closed, the Galaxy Z Flip will present users with a secondary display next to its dual-camera setup. Samsung plans to run notifications on this display. The standby layout for the secondary display offers the current time, date, and battery life. Flipped around, the backside of the Galaxy Z Flip doesn’t sport any particular features or components.

Not much else gets caught in this leak. It does confirm Samsung will insert a circular cutout to store the Galaxy Z Flip’s front-facing camera, but everyone knew that would likely surface here. Samsung also tries hiding the crease along the horizontal axis of its soon-to-be-announced foldable phone. Pre-installed wallpapers will try minimizing its prominence, but users will pick up on its when the Super AMOLED display shows solid colors.

Here’s the entire video, which multiple Twitter users are sharing:

Specifications-wise, the Galaxy Z Flip should fall into the high-end category. It’ll allegedly ship with Qualcomm’s Snapdragon 855+, 8GB of RAM, and 256GB of storage. That’s apparently for the base configuration, and thus Samsung might roll out multiple variants with different memory and storage sizes.

Expect several products and services to go official during Samsung’s Unpacked event on February 11. Both the Galaxy S20 series and the Galaxy Z Flip are all but guaranteed to appear. In addition, the leaked pre-order bonus for Samsung’s flagships indicates the Galaxy Buds+ will debut. Rumors also suggest a new smartwatch and a smart speaker could join as well. Samsung hasn’t confirmed anything yet, but we’ll find out soon enough.

How to use Google Lens to identify objects using your smartphone

Dan Baker/Digital Trends Google Lens, first introduced at Google I/O 2017, is one of the most exciting Android features for years. Originally an exclusive feature only found on Pixel smartphones, Google Lens is now baked into many Android handsets, and is available as an app in the Play Store. Google Lens combines the power of […]

In late 2019, Google announced that it’d shut down Google+, its beleaguered social network, for consumers due to “low usage” (90 percent of Google+ user sessions last less than five seconds) and “challenges involved in maintaining a successful product that meets consumers’ expectations” — not to mention the discovery of two exploits that could have allowed […]

Motorola is “adjusting” the launch timing for its foldable Razr smartphone, the company said, citing that it needs to make more phones to supply the “unparalleled” interest in the $ 1,499.99 Android-powered flip. The Razr was originally scheduled to go on presale on December 26 with a street date of January 9, both exclusively at […]