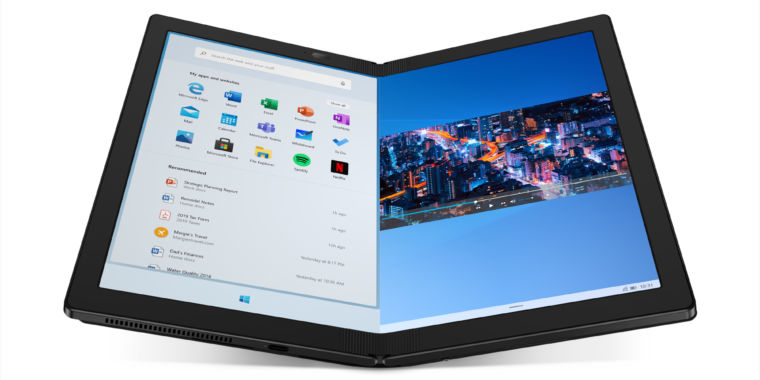 Let’s talk about the look and feel of the device first: final images of the ThinkPad X1 Fold look nearly identical to the prototype we saw last year. It’s a 13-inch tablet with chunky black bezels that measures 7.8mm thick when laid flat and 27.8mm thick when folded. Weighing less than 2.2 pounds, it’s not a particularly svelte device when compared to other flagship laptops and tablets, but it’s not cumbersome, either. When opened, the prototype device I spent a few minutes with felt like a slightly thicker-than-usual tablet, and while the thick bezels are jarring to look at, they serve a purpose on a device that’s meant to be moved and folded often.

The final display on the ThinkPad X1 Fold is a 13.3-inch, 2048×1536, pOLED panel with a 4×3 aspect ratio that Lenovo partnered with LG to include on the device. Since this device falls under the ThinkPad umbrella, Lenovo made a point to emphasize that the Fold has been put through the usual ThinkPad durability tests in addition to folding cycle tests. Supporting the foldable display is a multi-link torque hinge that Lenovo developed to make the opening and closing of the Fold as seamless as possible.

Lenovo is billing the ThinkPad X1 Fold as a device for those who frequently use a laptop, tablet, and smartphone and want a device that can combine some of the features of all of those devices into one. You can use the device as if it were any one of those devices—it acts as a tablet or a large smartphone when open, or as a makeshift laptop when folded in a 90-degree angle (there’s an integrated kickstand on the back to better support it in this laptop-esque mode).

There’s an on-screen keyboard for typing, but Lenovo also developed a Bluetooth keyboard that can magnetically attach to the bottom portion of the screen, turning it into a “real” keyboard area. I was surprised by how well this solution worked despite it being a bit cramped.

The screen also supports inking with Lenovo’s Active Pen, so you can take notes and scribble as you like. With Lenovo’s built-in software, you can take notes on the bottom part of the screen while keeping your reference material on the top part of the screen. This has become a common feature in the foldable and dual-screen devices we’ve seen announced or come out as of late—using screen real estate more efficiently by letting users have more than one program open at the same time.

It makes sense on devices like these, and the early version of Lenovo’s software worked well on the prototype when I tested it out. Not only was it easy to use both parts of the display at the same time, the software also swiftly reoriented open applications when I moved the prototype from portrait to landscape mode.

Now that the Fold will soon be released, Lenovo has shared its specs: the device will use Intel Core processors with Intel Hybrid technology, UHD graphics, up to 8GB of RAM, up to 1TB PCIe SSD, and a 50Whr battery for an estimated 11-hour battery life. It also has a 5MP webcam, an IR camera for Windows Hello, and support for CAT 20 LTE. On the edges of the ThinkPad X1 Fold will be one USB-C Gen 1 port, one USB-C Gen 2 port, and one SIM card slot—notably, an audio jack is missing from the device.

That’s not the only multi-screen device Lenovo announced today. The new ThinkBook Plus takes the midrange ThinkBook laptop from last year to a new level with a 10.8-inch E-Ink display embedded on its cover. Similarly to the E-Ink panel on the Lenovo Yoga Book, the secondary display on the ThinkBook Plus is designed to be a practical, less obtrusive screen for when you don’t want to open your laptop. You can write and draw on it using a new Lenovo Precision Pen, read documents on it, and choose to receive pertinent alerts like calendar, message, and email notifications on it.

E-Ink displays tend to be best for passive consumption like reading, which is why they are used so often in e-readers like Amazon’s Kindle. When I used the Yoga Book in 2018, I found its E-Ink panel to be acceptable for note-taking and sketching, but only if latency doesn’t bother you. It’s possible that Lenovo improved the responsiveness on the new Precision Pen, so I’m eager to test it out on the ThinkBook Plus’ E-Ink panel.

Aside from the new E-Ink display, the ThinkBook Plus shares its design with last year’s ThinkBook. It’s made of anodized aluminum and has a 13.3-inch FHD IPS main display, a fingerprint reader embedded onto its power button, as well as one USB-C port, two USB-A ports, an HDMI port, and an audio jack. It will run on 10th-gen Intel processors, UHD graphics, up to 16GB of RAM, and up to 512GB PCIe SSD with optional Optane Memory.

The new Moto Razr gets a teardown a day before release

The Moto Razr, about to be ripped apart. PBKreviews With the back shell off, you can see what’s under the chin. The TRON-style linework isn’t just for looks—these are the antennas. PBKreviews The bottom half, featuring one of the two batteries. PBKreviews After peeling the battery off, here’s the back of the mainboard. It’s empty! […]

Samsung’s next flagship smartphone, the Galaxy S20, gets photographed

The Samsung Galaxy S20+ 5G. We’re getting pretty wordy with these 5G phone names again. XDA Developers When turned on, you can make out that smaller hole punch camera at the top. XDA Developers The back, complete with the new rectangular camera array. XDA Developers XDA Developer’s Max Weinbach has scored the first in-person photos […]

What is atrial fibrillation, and why is your watch telling you about it?

Enlarge / See that irregular up-and-down motion right before the big beat? That’s atrial fibrillation. NASA What is atrial fibrillation, and why has Apple decided that it’s worth screening for it? The first question is much easier to answer, so let’s get that out of the way. Your heart has four chambers, two atria and […]