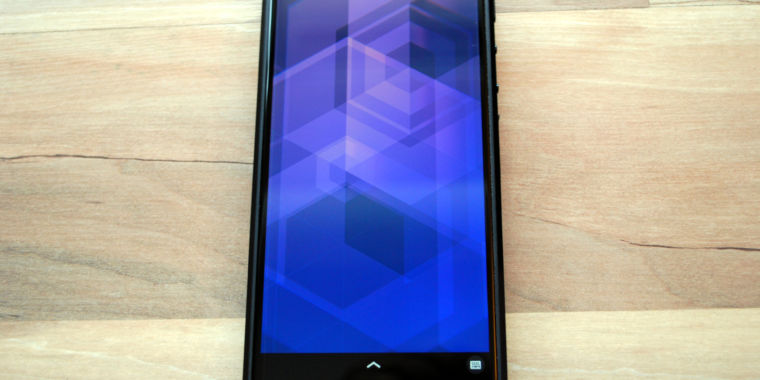 When Ars spoke to Purism founder and CEO Todd Weaver two weeks ago, the Librem 5 had been “shipping” for a month, but not to backers—only to Purism employees and inside developers. Weaver talked a little about the unexpected hardware issues the company had been experiencing late in the game including a batch of phone boards missing a 10kOhm resistor, and he gave us an updated schedule about when the phones would resume shipping. More importantly, Weaver said backers would begin receiving their phones by the first week of December.

Thankfully, the company met this latest deadline on time. On November 27, Ars reader Azdle posted a comment to the thread—”Just because I can, hello from my freshly-received Librem 5 phone! (And, no, I don’t work for Purism, I’m just an early backer.” Azdle was also kind enough to share some unboxing pictures and some commentary about what, exactly, a Librem 5 phone from the Birch shipment is—and what it’s not.

First of all, it’s not really a “phone” yet. There’s no audio when attempting to place a phone call. The cameras also don’t appear to work yet. Azdle reports “installing and opening up Cheese”—Cheese is a very basic Linux video application, installed by default in many distros—”I just get a message saying ‘no device found.'” There’s also effectively no power management yet, so the Librem doesn’t last long on battery. It takes a long time to charge as well.

The software needs polish in lots of places: Azdle notes that few apps so far understand mobile screen layouts, and there’s no obvious indications which apps have or have not been updated. The charging LED doesn’t light up when the phone’s off—although the phone is actually charging. And fine tunables like kinetic scroll—the ability to flick a scroll-thumb down hard, and expect it to keep scrolling for pages and pages like a thrown rock—still need tuning.

With that said, we recommend that everybody puts down the pitchforks and snuffs the torches for now. This isn’t supposed to be a finished, working, retail-ready phone—it’s a (mostly) working prototype, made available in very small numbers to extremely early backers who knew what they were getting into.

What the Librem 5 is (already)

Azdle likes the overall feel and design of the Librem 5, reporting “the design of the phone is sexy. It feels super solid.” The reader went on to say “the display is beautiful, the black-levels are amazing.” Azdle also has good things to say about the general UI, calling it intuitive, good-looking, and responsive with “basically flawless” touch input.

Installing apps from the PureOS repository works just as a Linux user would expect—although many of the apps’ UI don’t understand a mobile layout, so they may not fit on the screen. This is a bug—it’s annoying when an app turns out not to be well-adapted or maybe not even usable—but it’s also a feature. Die-hard Linux types, who are the Librem 5’s initial major market, will tend to prefer the ability to install arbitrary distribution packages, not only specially-curated and phone-friendly apps.

As you can see above, the phone is decidedly chunky. It’s only a tiny bit wider and taller than my own Pixel 2XL, but it’s about twice as thick. On the plus side, Azdle says, “it’s not hard to hold, definitely nicer than any of the recent ultra tall/wide flagship phones… [the] chamfers of the back edges definitely help with hiding some of the bulk, and give a place for your fingers to grab on.”

It’s also apparently a good pocket Web browser. Azdle reports reading reddit threads and forgetting they were using the Librem 5 at all, until getting prompted for an unsaved password when logging in.

Ars perennially recommends that anybody considering backing a crowdfunded project remember: you are not placing an early order for an existing retail product—you’re getting in on the ground stages of producing a product. You’re voting with your wallet on the directions you think an industry should take and seeing if it works out in practice. Not all projects will succeed, very few will succeed on time, and many will wind up being something somewhat different than the original pitch.

We’re still not entirely happy with the way Purism handled communications about the Aspen and Birch batches of the Librem 5, but it looks like the company has made some serious accomplishments worth talking about—and they did meet the self-imposed deadline they gave us a couple of weeks ago.

Arguably, Purism has also gotten farther than Canonical ever did with Ubuntu Touch. Ubuntu Touch neither felt like “real Linux” at all, nor did it succeed as a purely-mobile experience despite Canonical’s much greater financial resources.

If you just want to buy a phone, the Librem 5 is neither ready for you yet nor is it a particularly safe long term bet. But if you want to push the mobile phone industry in a Linux-ier direction and help create a software ecosystem that brings a real Linux experience to a mobile form factor, the Librem 5—along with the unrelated but similar PinePhone—look like good places to pitch in and help.

Enlarge / iPadOS on the new iPad. Samuel Axon Apple released three major new operating system updates today, following the release of iOS 13 for iPhones and iPods last week. iPadOS brings the changes and features of iOS 13 to the iPad, plus a plethora of new tablet-specific functionality as the iPad’s operating system officially […]

Remember the iPod? Apple just released the first new one in four years