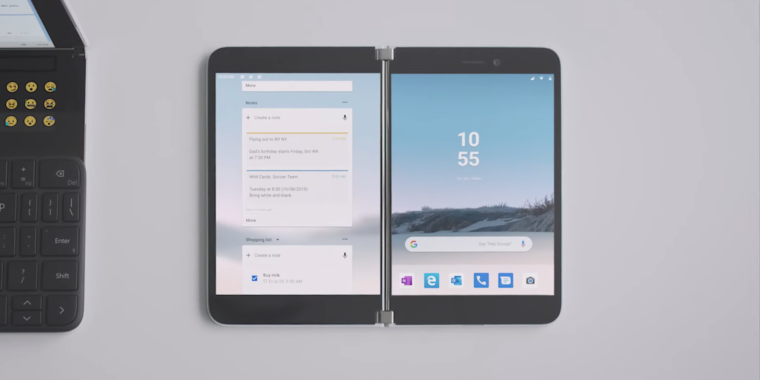 Microsoft’s first-ever Android phone, and its first self-branded phone, is slowly becoming a reality. The Surface Duo, which was announced a full year before it was planned to release to market, was recently spotted in the wild. Twitter user Israel Rodriguez spotted a person with a prototype device on the Vancouver subway and snuck a spy video out into the world.

The video appears to show one new hardware addition that wasn’t present in the initial announcement in October 2019: an LED flash next to the camera. The Surface Duo has a single camera above the right display, which, thanks to the 360-degree hinge, acts as the front and rear camera. The video shows a new white circle next to that camera, so now it seems like you’ll get a rear (and front) flash.

The Surface Duo actually spends a good portion of the video being slow and unresponsive. At 46 seconds in the video, you can see the device lock up in some kind of app. First tapping on a button doesn’t do anything, then it takes multiple swipes down from the top of the screen to open a panel. Swipes in from the bottom of the display, meant to trigger gesture navigation and close the app, take multiple attempts to work. The good news is that the “Holiday 2020” release window means Microsoft still has something like nine months to work out all the bugs.

Other than the fact that the Surface Duo runs Android, comes with two 5.6-inch displays, and will be out Holiday 2020, we know next to nothing about the device. Microsoft hasn’t said a word about any of the internal specs like the SoC, RAM, or battery life of the strikingly thin device, and we have no idea how much the device will cost. Surface devices are usually high-end, but when it comes to foldable smartphones, “high-end” can mean anywhere from $ 1,000 to $ 2,700. Microsoft isn’t shelling out for one of those expensive, high-tech flexible OLED displays, but it does have twice as many displays as normal, and they are in a weird aspect ratio to boot.

Last month, Microsoft released an SDK for the Surface Duo, allowing developers to wrap their heads around the dual-screen functionality and hopefully build support for it into their apps.

The release date for this device is still a while away, so we’ll be on the lookout for more leaks.

Enlarge Andrew / Flickr Today, Apple shared its fiscal second-quarter results with shareholders. After a tumultuous first quarter that saw CEO Tim Cook revise the company’s guidance weeks before the earnings report was made public, investors and analysts were looking for Apple to divulge some good news—particularly surrounding iPhone sales, its services business, and the situation […]

A tour of elementary OS, perhaps the Linux world’s best hope for the mainstream

Enlarge / The default look of ElementaryOS Juno. Scott Gilbertson Everyone is a Linux user, but almost no one knows it. The operating system is a strange beast. You’d be hard pressed to come up with another tool so widely used, so widely deployed, and so absolutely necessary to the functioning of the modern world […]

Windows 10 October 2018 Update is at last being pushed automatically

Enlarge / Who doesn’t love some new Windows? Peter Bright / Flickr The ill-fated Windows 10 October 2018 Update has hitherto been offered only to those Windows users that manually sought it, either by using the dedicated upgrade and media creation tools or by manually checking for update in Windows Update. Three months after its […]