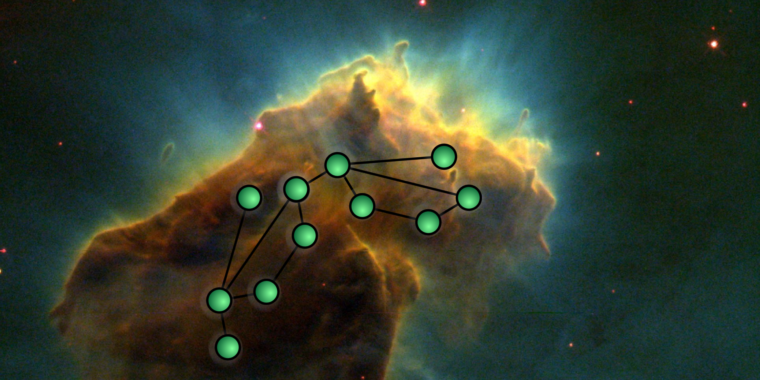 It’s difficult to coherently explain Nebula in a nutshell. According to the people on Slack’s engineering team, they asked themselves “what is the easiest way to securely connect tens of thousands of computers, hosted at multiple cloud service providers in dozens of locations around the globe?” And (developing) Nebula was the best answer they had. It’s a portable, scalable overlay networking tool that runs on most major platforms, including Linux, MacOS, and Windows, with some mobile device support planned for the near future.

Nebula-transmitted data is fully encrypted using the Noise protocol framework, which is also used in modern, highly security-focused projects such as Signal and WireGuard. Unlike more traditional VPN technologies—including WireGuard—Nebula automatically and dynamically discovers available routes between nodes and sends traffic down the most efficient path between any two nodes rather than forcing everything through a central distribution point.

Getting started with Nebula isn’t too difficult, although the documentation is a little sparse. The Github repository for Nebula makes binaries for Windows, Linux, and MacOS available, along with a sample configuration file. The config files consists of pki, static_host_map, lighthouse, listen, tun, and firewall sections.

Nebula’s term for a publicly-available node in the network is a “lighthouse.” Lighthouse nodes should be available over underlying network connections without Nebula up and running, and they represent a point of entry for new nodes joining the network. But once a node has joined the network, it won’t need to route all its traffic through a lighthouse—nodes will automatically discover the most efficient path between themselves, and if that doesn’t include a lighthouse node in the middle, that’s fine. Even if traffic needs to punch across NAT “the wrong way,” there’s no problem—because each node behind NAT will make and keep open tunnels to all nodes it knows about.

It didn’t take much testing to confirm that Nebula’s promise to automatically discover the best route works as advertised. When running an iperf3 network speed test from nat1 to doublenat, we got 674Mbps throughput, making it painfully clear that packets aren’t being routed through lighthouse, which is in Digital Ocean’s New York datacenter several hundred miles away. Instead, doublenat has punched a tunnel outward through the NAT (Network Address Translation) layer directly to nat1, and the two hosts can use that established tunnel to communicate directly.

We can already hear some of you clamoring, “can I use this to escape obnoxious networks with overbearing firewalls?” and the answer—sorry!—is “probably not.” Just like WireGuard, Nebula operates over UDP only—so overzealous firewalls that won’t allow WireGuard connections won’t allow Nebula either. This also sharply limits its value as an exfiltration tool, since a big wash of outbound traffic on an arbitrary UDP port will stick out like a sore thumb to any network analysis tools, even if the firewall allows it.

We think that the greatest potential value to using Nebula over a more conventional VPN tool like WireGuard is its ability to discover the most efficient routes wherever it happens to be. If you have Nebula running on your laptop, your home PC, and a Digital Ocean droplet, the laptop will communicate with the PC at LAN speeds when it’s at home and Internet speeds when it’s on the road.

A tour of elementary OS, perhaps the Linux world’s best hope for the mainstream

Enlarge / The default look of ElementaryOS Juno. Scott Gilbertson Everyone is a Linux user, but almost no one knows it. The operating system is a strange beast. You’d be hard pressed to come up with another tool so widely used, so widely deployed, and so absolutely necessary to the functioning of the modern world […]

Intel puts 8 cores, 16 threads, and a 5GHz turbo option in a laptop processor

Enlarge / An eight-core/16-thread Coffee Lake die. Intel The first processors to include Intel’s ninth-generation Core branding came out last year with a limited line-up: just a handful of high-end desktop processors in the Coffee Lake family. Today, the company has unveiled a bumper crop of new ninth-gen chips. There’s a set of H-series processors […]

Game dev union leader: “Dream job” passion “can open us up to exploitation”