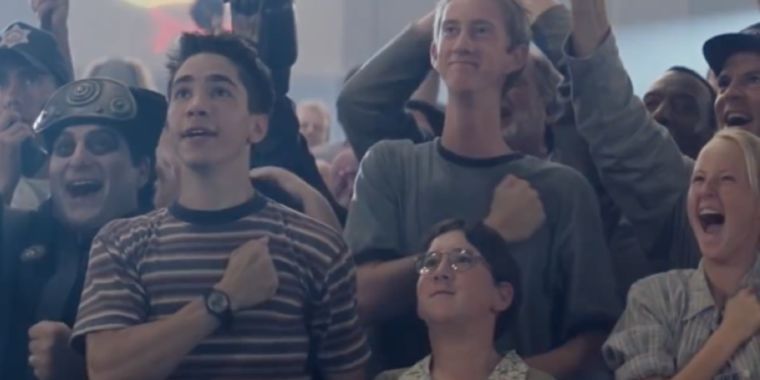 Galaxy Quest, the glorious 1999 science fiction action comedy starring Tim Allen and Sigourney Weaver (among others), will turn 20 on December 25 of this year. And what better way to celebrate this important milestone than with a documentary feature? Never Surrender: A Galaxy Quest Documentary is an entertaining, heartfelt tribute that comes to us (believe it or not) from the same folks behind the wildly popular online Honest Trailers series.

(Spoilers for Galaxy Quest below.)

The premise of the movie is deceptively simple: what if aliens watched transmissions of a popular science fiction TV show from Earth and thought it was real? An alien race called the Thermians model their entire society on the principles of a fictional Galaxy Quest TV show, building real, functional versions of the spaceship and much of the technology from the series. When their very existence is threatened by a reptilian humanoid general from another species named Roth’h’ar Sarris, they travel to Earth to ask their heroes for help—arriving in the middle of a Galaxy Quest fan convention.

Of course, the heroic crew of the NSEA Protector are in fact washed-up actors, eking out a living making personal appearances and selling autographed photos. Suddenly they find themselves aboard an actual spaceship, facing real peril, and must rise to the occasion to save the day—in essence becoming more like the characters they once played.

Jason Nesmith (Tim Allen) once played Commander Peter Quincy Taggart on the fictional show, and relishes soaking up the the adoration of fans, to the annoyance of his former co-stars. Gwen DeMarco (Sigourney Weaver) is a leggy blonde who played Communications Officer Tawny Madison. Her only job was to repeat the commands of the ship’s computer and show a little cleavage. Alexander Dane (Alan Rickman) played Science Officer Dr. Lazarus, an alien from the Mak’Tar race. He was once an esteemed British thespian who bitterly resents being typecast as an alien, forced to repeat variations on his most famous line at every appearance.

Fred Kwan (Tony Shalhoub) played Tech Sergeant Chen, while Tommy Webber (Daryl “Chill” Mitchell) played child pilot Lt. Laredo, now all grown up. Gate-crashing the signing (and the ensuing adventure) is Guy Fleegman (Sam Rockwell), who once played “Crewman #6” on Episode 81 and was killed in the first 15 minutes. Representing the rabid fandom that has grown around the original Galaxy Quest are a group of teen nerds: Brandon (Justin Long, in his first major film role), Kyle (Jeremy Howard), Hollister (Jonathan Feyer), and Katelyn (Kaitlin Cullum). Snubbed repeatedly by Jason early on, the nerds’ encyclopedic knowledge of the show proves to be invaluable to helping defeat Sarris and bringing the crew safely home.

This fine ship, this fine crew

The film is a clear homage to Star Trek, as well as its intensely committed fan base. Fun fact: NTE-3120 is the registration for the Protector, with the letters standing for “Not The Enterprise.” Taggart is modeled after Captain Kirk, and Jason is a William Shatner-esque figure, teased relentlessly for constantly removing his shirt, and performing showy rollouts. (“Does the rolling help?” Gwen caustically asks when Jason does this while exploring an alien plant. When he says it does, she adds, “Where’s your gun?”)

Dr. Lazarus is the Spock-like figure, Laredo evokes ST:TNG‘s Wesley Crusher, Chen is a stand-in for Scotty, Tawny Madison is based on Uhuru, and Guy is a Red Shirt—so he is understandably pretty paranoid whenever there is potential danger. (“I’m expendable! I’m the guy in the episode who dies to prove the situation is serious! I got to get out of here! “) And Star Trek fans were so notoriously geeky about analyzing the most trivial details from the series, they inspired a famous Saturday Night Live sketch, in which a frustrated Shatner berates convention-goers: “Get a life, will you, people?”

Galaxy Quest didn’t exactly bomb at the box office, grossing about $ 90 million globally and earning mostly positive reviews. But it wasn’t the blockbuster success that it should have been. Galaxy Quest is a rare perfect film: a masterful satire with clever twists, wickedly funny, and so very meta. And it’s stood the test of time, holding up even after multiple re-watchings. What makes it truly great, and so beloved by fans 20 years later, is its obvious deep affection for its targets. Sure, the film pokes fun at the Star Trek franchise: the cheesy tropes, the characters, the actors who play them, and the fandom it has inspired over the years. But it is never mean-spirited, cynical, or condescending.

Jack Bennett, the director of Never Surrender, has brought that same sensibility to the documentary. Screen Junkies—an online movie magazine and YouTube channel, owned and operated by Fandom—earned Internet fame for their snarky Honest Trailer series, mercilessly skewering overwrought film trailers. But they resisted giving Galaxy Quest the Honest Trailer treatment despite repeated requests from viewers over the years, correctly intuiting that it would be gilding the lily, so to speak. (They did finally make one, but  it’s not available online as of this writing; it was shown before the screening we attended.) Bennett wisely trades in snark for sincerity for Never Surrender—although there are plenty of laughs and slyly subversive edits to keep the tone from ever becoming saccharine.

A stroll down memory lane

All film documentaries traffic in colorful behind-the-scenes details, and Never Surrender is chock-full of them—some new, some well-known to longtime fans. For instance, Enrico Colantoni reveals that his audition for Mathesar nearly bombed—until he whipped out a bizarre voice he’d been working on that became the model for the Thermians’ unusual vocal inflections. Sigourney Weaver famously drops an F-bomb when Gwen and Jason encounter “the chompers” in the bowels of the Protector II. It was dubbed—badly, on purpose, so you can still read her lips—to be “Screw that!” in the theatrical release, in order to earn a more family-friendly PG rating.

Never Surrender truly shines at revealing the complicated, often contentious process of filmmaking; honestly, it’s a miracle any films get made at all, never mind truly great ones that go on to become widespread beloved cultural touchstones like Galaxy Quest. Harold Ramis was originally hired to direct the film for Dreamworks, but left the project due to creative differences (his vision was considerably more cheesy); Dean Parisot replaced him. The studio considered Robin Williams and Kevin Kline for the role of Jason/Taggart, since at the time Tim Allen was mostly known as a comedian and star of the just-cancelled Home Improvement sitcom. Dreamworks co-founder Steven Spielberg hated the octopus-like designs for the Thermians’ true native form, preferring a more classic “grey alien“—but it was too late to change it.

Any one of these would have resulted in a very different—and I would say, lesser—film. Apparently Dreamworks was shooting Gladiator at the same time, and were too distracted to interfere much with Galaxy Quest.

Best of all, the documentary celebrates the culture of fandom—specifically the positive, uplifting aspects, rather than the toxic cesspool of entitlement that online fandom can sometimes be today. The film devotes a significant amount of screen time to Galaxy Quest fans and cosplayers Harold and Roaxanne Weir, who speak at length about what the film has meant to them, and why they find their cosplay so fulfilling. In one of the most moving scenes, Harold—dressed as Mathesar—gets to meet his hero, Colantoni, who leans into the moment and poses with the entire group of Thermian cosplayers. Truly, as Spiner says, “The nerds have inherited the Earth.”

Sony is launching a new campaign that will reward PlayStation 4 owners with free games and help independent developers struggling due to the coronavirus pandemic, officially called COVID-19. Called the Play at Home Initiative, Sony looks to do what it can to aid the gaming community during these difficult times. PlayStation President and CEO Jim […]

Last month a wireless SNES controller appeared at the FCC giving us the strongest hint yet SNES games were heading to Switch. Now we know for sure as Nintendo is releasing 20 SNES titles for Nintendo Switch Online subscribers today. As Polygon reports, Nintendo held a Nintendo Direct last night where it announced a number […]

As the holiday season arrives, the gaming industry as a whole has been increasing its TV ad spend: In November, 13 brands spent an estimated $ 62.7 million — over $ 2 million more than October’s spend — and shelled out big for the NFL, college football, and the NBA. PlayStation led the way for […]