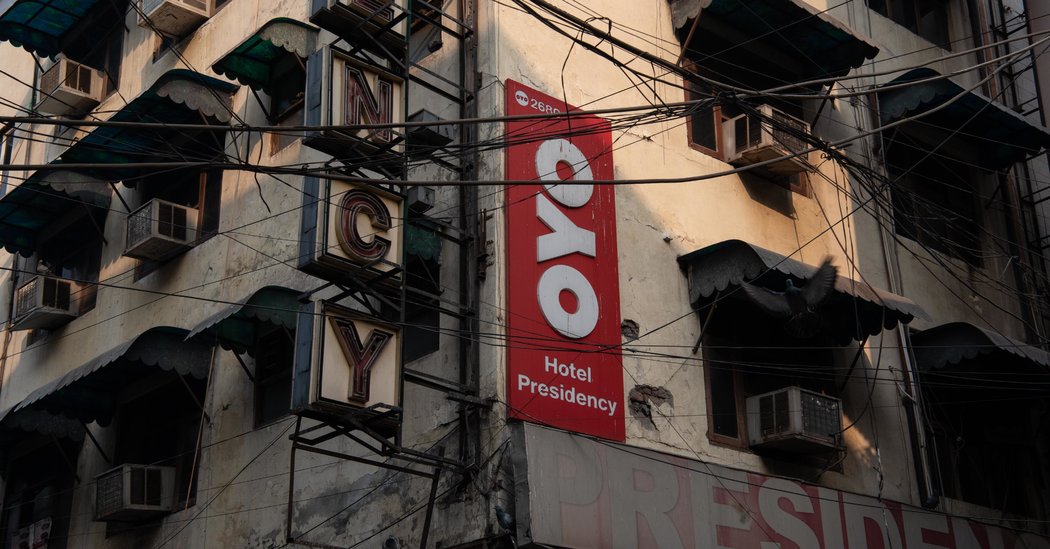 MUMBAI, India — Oyo, once one of India’s fastest-growing tech start-ups, is now rapidly scaling back.

In recent weeks, Oyo, a budget hospitality company, has pulled out of dozens of cities, cut thousands of hotel rooms, started laying off employees and slashed other costs as it faced pressure from its biggest investor, the Japanese conglomerate SoftBank, to curb vast operating losses.

The retreat has been swift and sweeping. In India alone, Oyo has lost more than 65,000 rooms — or about a quarter of what it had offered to travelers — since October, according to internal data from current and former employees that was reviewed by The New York Times. This month, Oyo also stopped selling rooms in more than 200 small Indian cities, according to company documents and one current employee and one former employee.

The moves come on top of more than 2,000 layoffs around the world, which Oyo began rolling out last week, according to six current and former employees. Before the cutbacks, Oyo had about 20,000 employees in 80 countries.

Oyo said some of the data obtained by The Times was inaccurate but declined to be specific. In an email to employees on Monday, Ritesh Agarwal, the company’s chief executive, said Oyo was focused on sustainable growth and profitability — which meant layoffs.

“Unfortunately, some roles at Oyo will become redundant as we further drive tech-enabled synergy, enhanced efficiency, and remove duplication of effort across businesses or geographies,” he wrote in the email.

The Economic Times, an Indian publication, first reported in December that job cuts at Oyo were coming.

Oyo’s actions are part of a broader pullback by start-ups funded by SoftBank. Armed with a $ 100 billion fund known as the Vision Fund, SoftBank has shoveled money into start-ups across the globe in recent years. That has given many young companies fuel to expand, often with little thought for profit.

Last year, some SoftBank-funded start-ups began running into trouble — most notably WeWork, the office space company, which failed to go public when investors began questioning its losses. WeWork ultimately ousted its chief executive and slashed its valuation to less than $ 8 billion from $ 47 billion.

WeWork’s fall led to questions about other start-ups that SoftBank had financed and whether those young firms could make money. Last month, the dog-walking service Wag underwent several rounds of layoffs before SoftBank sold its shares at a loss. The construction start-up Katerra, another SoftBank-funded company, also cut its staff.

This month, layoffs have gathered momentum at start-ups that SoftBank had invested in. The South American delivery service Rappi and the San Francisco car-sharing start-up Getaround said they were laying off employees. Zume, a company that used robots to make pizzas and had been valued at $ 2 billion, cut more than half of its work force. It also stopped making pizzas.

Some investors and start-ups said they were now approaching SoftBank’s Vision Fund cautiously — or, in some cases, avoiding it altogether.

“We have advised almost all of our companies to steer clear,” said Josh Wolfe, an investor at the venture capital firm Lux Capital who has been critical of SoftBank’s strategy. “Everyone else was fearful to say the emperor had no clothes.”

SoftBank declined to comment on Oyo and other start-ups in which it has invested.

Mr. Agarwal founded Oyo in 2013 to organize India’s small independent hotels into a chain. The company markets rooms online and takes a cut of each stay. Mr. Agarwal, who has become a business star in India, has said he aspired to make Oyo the world’s largest hotel chain by 2023, displacing Marriott.

But as Oyo tried to expand globally, in part pushed by SoftBank, it spent heavily on incentives to attract hotel owners and customers to its site. That resulted in losses in India, where Oyo has said it will lose money through at least 2021.

Masayoshi Son, SoftBank’s chief executive, began investing in Oyo in 2015. SoftBank and its Vision Fund now own half its stock. While Mr. Son has called Oyo a jewel of his fund and urged it to grow quickly, he has since changed his stance.

As Oyo’s losses have mounted, senior leaders at the company have told employees that SoftBank had demanded that it become profitable on a basis known as EBITDA — earnings before interest, taxes, depreciation and amortization — by mid-2020, according to current and former employees.

In another sign of SoftBank’s shifting position, Yahoo Japan, which is half-owned by SoftBank, pulled the plug in November on a Japanese apartment-rental venture with Oyo. Most of the Oyo employees involved in the Japan venture have been laid off or relocated, current and former employees said.

Oyo faces other troubles in India. On Friday, the Indian income-tax authorities visited the company’s headquarters just outside New Delhi, requesting reams of documents. The tax department and Oyo said the government was examining whether the company was properly withholding and remitting income taxes on payments to vendors.

The Times reported this month that Oyo had offered thousands of unlicensed hotel rooms and sometimes offered free rooms to government officials to deter enforcement. The Times also described how some Oyo employees worked together to commit fraud against the company.

In his email on Monday, Mr. Agarwal said the behavior described by The Times would violate the company’s code of conduct. “We take all the allegations very seriously and are looking into each and every one,” he wrote.

To stem losses, Oyo has also cut back on staff and supplies such as mineral water and cleaning fluids in the hotels it runs itself, according to the current and former employees. Oyo staff members managing some of the hotels have been instructed to save more money on electricity bills by switching off lights, elevators and even boilers for hot water, they said.

Morale has plummeted among thousands of Oyo workers globally, current and former employees have said.

Prabhjeet Singh, an Oyo business development manager who left the company in September, said employees who criticized the company ran a greater risk of losing their jobs.

“It’s a culture of silence,” he said.

Oyo’s reputation has deteriorated so much in India that other employers are reluctant to hire its former workers, said Mr. Singh, who has been unable to land another job.

“They look at me as if I’ve done a crime working at Oyo,” he said.

A line of unsold 2019 Model 3 sedans sits at a Tesla dealership in Littleton, Colo.David Zalubowski/Associated Press A German car-rental company was so fed up with quality and service issues on its bulk Tesla order that it opted to cancel the purchase entirely.  Nextmove’s CEO told Bloomberg that while he loves the Model 3, […]

‘Destiny 2’ got off to a rocky start, but it’s turned into a game that everybody should play

Bungie If you’re looking for a video game you can really sink your teeth into, “Destiny 2” might become your next big addiction. The game has evolved drastically since its launch in late 2017. Whether you’ve taken a break from “Destiny” or you’ve never played Bungie’s sci-fi shooter before, “Destiny 2” is absolutely worth giving […]

Richard Branson’s Virgin Galactic announced Friday that after years of waiting and delays, it will finally move its operations to Spaceport America, the launch site in rural New Mexico that bills itself as “the world’s first purpose-built commercial spaceport.” For years the spaceport, which cost New Mexico taxpayers $ 220 million to build, waited for […]

The Best Lenovo Laptops for 2020

When it comes to delivery drones, Google’s Wing is miles above the competition