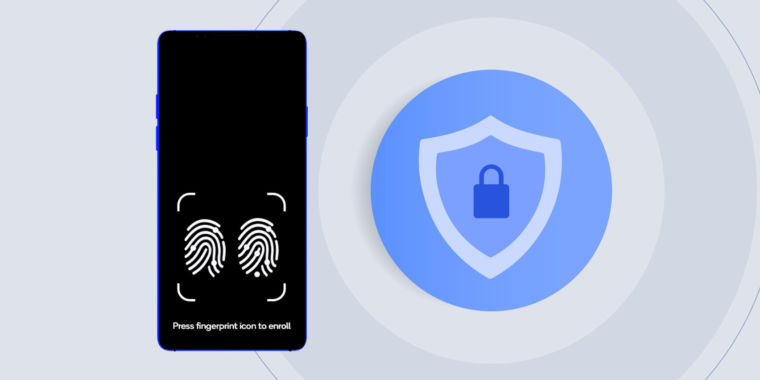 In-screen fingerprint readers were the standard form of Android biometrics on 2019 flagships, and in 2020 we’ll start seeing the second-generation versions of this technology. Qualcomm is hosting its big tech show this week, and one of the first announcements is the new version of its “3D Sonic Max” ultrasonic in-screen fingerprint sensor. The second-gen sensor is absolutely huge. Qualcomm says it’s 17 times larger than the previous version.

In-screen fingerprint readers offer the benefit of being invisible and under the screen, and they can go on the front of the device while still allowing for an all-screen smartphone design. Being on the front lets you activate the fingerprint reader while the phone is on a desk, without picking it up. The downside is that there’s not tactile guidance for where your finger should go. There’s just a big, smooth pane of glass, and if you miss the fingerprint sensor, you’re going to fail to unlock your phone. For in-screen fingerprint readers, bigger is better, since a wider target area means less of a chance you miss the invisible reader.

Qualcomm’s first in-screen fingerprint reader, available on the Samsung Galaxy S10, was basically as small as it could possibly be: 9mm×4mm. This is much smaller than a fingertip, which is somewhere around 14mm×14mm—you were only scanning a tiny sliver of your fingertip. Qualcomm’s second-gen reader is huge: 30mm×20mm. Qualcomm says this is big enough to scan two fingers at once, and—while I’m not sure why you would ever want to do this—”simultaneous two-finger sensing” is actually supported. You can be extra-secure at the cost of one-handed usage.

Qualcomm is also promising better security for the new fingerprint reader. The company says the second-gen sensor has 1 in 1 million accuracy, compared to the 1 in 50,000 accuracy of the old version. This is good, since the old version has had a number of security concerns stemming from 3D printers and clear cases. Most smartphone biometrics are hackable, though. They provide “good enough” security for most people and deter basic thieves or spying acquaintances.

The bigger size sounds like it will be a huge benefit for usability. This will be a giant, unmissable target for your finger, and it will cover a big chunk of the bottom portion of the phone. Having a fingerprint reader that is bigger than any other touch target on your phone means you will never miss the fingerprint reader again, allowing you to more quickly and consistently unlock the phone. There’s no word on when this new fingerprint reader will be integrated into shipping devices, but most other things at the show are expected out sometime in 2020.

Enlarge Valentina Palladino Google spent a lot of time and effort trying to convince everyone that Chrome OS isn’t just for laptops. The fruits of the company’s labor have been slowly revealing themselves over the past year through software updates and the few Chrome OS tablets that are already available. But Google officially ushered in […]

Report: Google Wifi 2 is half Wi-Fi router, half Google Home

Enlarge / The first-gen Google Wifi. Google With Google’s big 2019 hardware event set for October 15, we’re starting to zero in on what exactly to expect from the show. Besides the heavily leaked Pixel 4, we’re also expecting a new Google Home Mini, maybe a new Pixelbook, and today’s subject: a sequel to Google’s […]

How to file your tax return online

The Humble Phone Call Has Made a Comeback

Need a haircut? Professional barbers can guide you through the whole process

When and where to find Animal Crossing’s rarest fish

Google Pixel 4a will have a 5.8-inch display and Snapdragon 730, report says