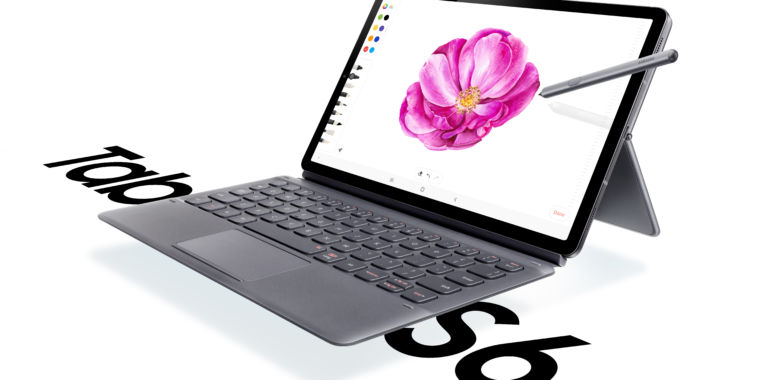 Samsung is still not giving up on the Android tablet market. Today the company announced the Samsung Galaxy Tab S6, its latest high-end tablet, for $ 649.

The Samsung Tab S6 features a 10.5-inch 2560×1600 OLED display, a 2.84GHz Snapdragon 855, and a 7040mAh battery. The base version has 6GB of RAM and 128GB of storage, with a higher tier of 8GB of RAM and 256GB of storage. For cameras, there’s an 8MP front camera, while the rear gets a 13MP main camera and a 5MP wide-angle lens. The device is down to 5.7mm thick and weighs 420 grams. This is Samsung’s first-ever tablet with an in-screen fingerprint reader. Interestingly, it’s an optical reader instead of the ultrasonic tech that the Galaxy S10 uses.

The S-Pen comes with the tablet but doesn’t stow away inside the body; instead, a groove on the back of the tablet gives it a spot to magnetically attach to. Of course, don’t expect the tablet to sit flat on a table with a big pen attached to the back. As with other newer Samsung devices, the S-Pen now comes with a battery and some Bluetooth functionality, allowing it to do things like work as a remote shutter button for the camera. A new “Air action” gesture system lets you do things like change the camera mode or scroll through pictures with a flick of the pen.

There’s also a new “Book Cover Keyboard” for $ 180 that you can attach to pogo-pins on the bottom of the tablet. This cover features a keyboard and trackpad and will launch a “new and improved” version of Dex, Samsung’s desktop interface. The cover doesn’t just go around the back of the tablet; there’s a spot that covers the pen, too. There’s a hinge just below the pen lump, so you can pull back the cover away from the tablet and still get to the pen.

Seeing any company release an Android tablet is always a surprise, as the market is pretty much dead. The only big players you can count on for Android tablets anymore are Samsung and Huawei, and maybe Amazon, if you want to count forked Android. Android tablet tech still might see a resurgence in the coming years, though, thanks to foldable smartphones, which basically turn into Android tablets when they open up.

Pre-orders for the Galaxy Tab S6 start August 23, and the device ships September 6. Samsung says there will be an LTE version available later.

Guidemaster: Our favorite accessories for iPhones and iPads

Enlarge Sitthiphong Thadakun / EyeEm With the popularity of the iPhone and iPad comes a sea of accessories for both devices. While iPhones and iPads are powerful devices on their own, they can be enhanced by accessories that protect them, let you use them in different ways, and make them work harder for you. But […]

Enlarge The news from Microsoft’s Build developer conference that surprised me most was that Microsoft will ship a genuine Linux kernel—GPLed, with all patches published—with Windows. That announcement was made with the announcement of Windows Terminal, a new front-end for command-line programs on Windows that will, among other things, support tabs. Microsoft’s increased involvement with […]

How to connect AirPods to your MacBook

One of the internet’s favorite horoscope and astrology apps is now is on Android after over 120,000 fans begged for it

New Star Wars movie to be made by Thor: Ragnarok director?

Apple should replace the iPhone’s Lightning port, not remove it