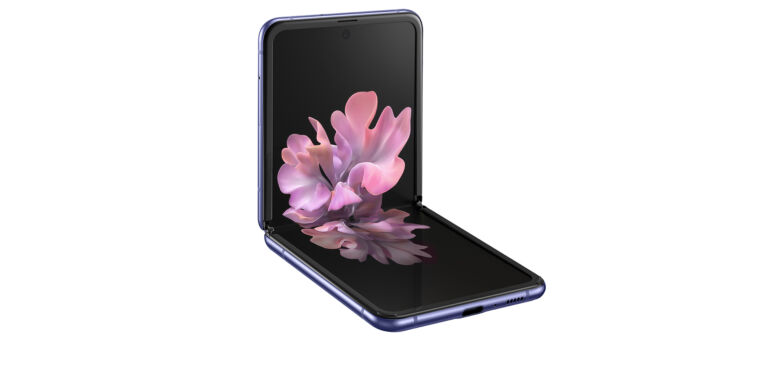 Take a Samsung phone, bend it in half, and what do you get? The Galaxy Z Flip! Alongside the Galaxy S20, Samsung is also introducing its second-ever foldable smartphone. Unlike the Galaxy Fold, which was a tiny tablet that folded in half, the Galaxy Z Flip is closer to a normal-size smartphone that folds into a tiny square, making it Samsung’s competitor to the Moto Razr.

When open, the Z Flip is about the size of a Galaxy S20+. You get a 6.7-inch, 2636×1080 OLED panel with a hole-punch camera, the usual Samsung interface, and slightly thicker-than-normal bezels. Close the phone and you’ll see a tiny 1.1-inch, 300×116 display on the front, which is just big enough to display the time, date, battery status, and any incoming notifications.

While the Galaxy Z Flip has plenty in common with the Galaxy Fold, one big improvement is that it’s the first foldable smartphone with a glass display cover. That’s right, glass that can fold in half. Previous foldable smartphones used a plastic display cover, which introduced all sorts of problems. Plastic is delicate and easily scratched, which limits many of the design possibilities of foldable devices. Designs like the Huawei Mate X, with a wraparound display on the outside, are not going to last long with only plastic for protection. Plastic is also not a great material when it comes to sliding your finger across the display. The Galaxy Fold had a big indent in the middle of the display where it folded in half, creating a valley for your finger to get stuck in. For the new Moto Razr, Motorola warns “bumps and lumps are normal” in the plastic-covered display. Samsung’s flexible glass is the first step toward more durable, practical, better-feeling foldable devices. Samsung says the phone can survive 200,000 folds.

The Galaxy Fold hinge had trouble with debris ingress, and Samsung attempted to address that with the Galaxy Z Flip. Samsung says the hinge features “nylon fibers crafted by micro-height-cutting technology to repel dirt and dust.” It looks like it has brushes around the hinge to keep dust out.

One new trick in the Z Flip’s hinge is the ability to sit on a table half-open in an “L” shape, making the phone look a bit like a makeup compact. In this “L” shape, the phone can freely stand up on a table, and Samsung’s Android skin will split the software between the top and bottom half of the display, letting you do things like have a video call in the upright, top portion of the display. Neat!

The Z Flip specs aren’t up to the same 2020 flagship standards as the Galaxy S20. Instead, this is more like a phone from last year. You get 2019’s Qualcomm chip (the Snapdragon 855+) instead of the newer Snapdragon 865 launching with the S20. After the delay of the Galaxy Fold, we’ve got to wonder if this phone was also delayed. A launch next to the Galaxy Note 10 in August would have made much more sense for a Snapdragon 855+ device.

The phone has 8GB of RAM, 256GB of UFS 3.0 storage, a MicroSD slot, and a 3300mAh battery. That battery shows the tradeoff you’re making with foldable devices. The similarly sized Galaxy S20+ has a much bigger 4500mAh battery—the hinge in the middle of these foldables takes up a lot of space that would otherwise be used for battery.

The camera package is a step down from the S20, too. You’re getting a 12MP main camera and a 12MP wide-angle camera on the rear, and that’s it. Instead of an in-screen fingerprint reader, the reader is mounted on the side of the phone. The Z Flip has wireless charging, a USB-C port, and no headphone jack.

The Z Flip will retail for $ 1,380, putting it at basically the same price as the highest-end Galaxy S20, the $ 1,399 Galaxy S20 Ultra. The two phones will offer an interesting question to consumers. Do you want the standard form factor Galaxy S20 with a better camera and faster SoC, or do you want the slower, less capable phone that comes in a wild new form factor? So far, every foldable has had durability issues that crop up quickly after launch, so even if you’re interested in the Z Flip, it’s probably best to wait for initial reports on the device.

Your 3D printer is not a real 3D printer until you print 3D Benchy, a popular torture test that takes the form of this cute toy boat. EPFL Here’s how this works. The blue laser beam hits a DLP chip and produces the resin hardening image for each rotation angle, while the yellow resin container […]

Yesterday on Twitter, Samsung’s US support team reminded everyone to regularly—and manually—virus-scan their televisions. Samsung’s team followed this up with a short video showing someone in a conference room going 16 button-presses deep into the system menu of a Samsung QLED TV to activate the television’s built-in virus-scan, which is apparently “McAfee Security for TV.” Enlarge […]

Linux on laptops: Ubuntu 19.10 on the HP Dragonfly Elite G1

Ubuntu 18.04.3 LTS didn’t work out so well, because the Wi-Fi adapter didn’t have an in-kernel driver. But the latest interim release—October 2019’s Eoan Ermine—worked swimmingly. Jim Salter Running sudo lshw on the command line enumerates all the physical devices and interfaces on the laptop—and under 19.10, all of them have drivers installed. Jim Salter […]