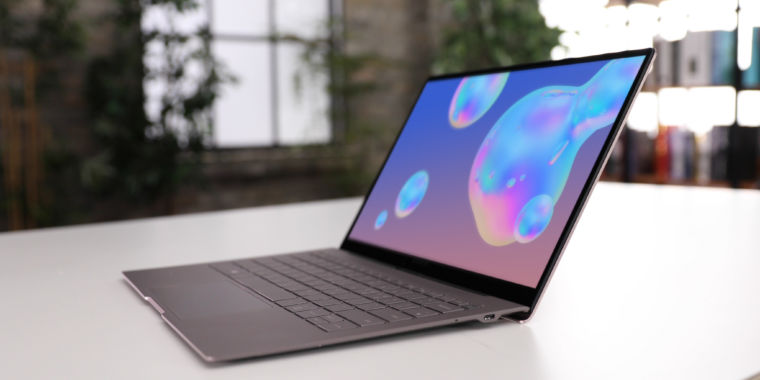 Samsung unveiled a new laptop today. Driven by Qualcomm’s Snapdragon 8cx ARM processor, the Galaxy Book S is a Windows 10 laptop that promises to be as portable and long-lasting as mobile devices. The company claims the device will get up to 23 hours of battery life and that it will connect to gigabit LTE wireless networks on the go.

Like other ARM laptops, the promise is that the S will be “always on” and “always connected,” with a touch-to-wake, instant-on feature. The laptop weighs just 0.96kg and comes with a 13.3-inch, multi-touch display (10 points), so portability is a key part of the value proposition here.

Samsung announced the product during its Unpacked event for the Galaxy Note 10 and spent a fair bit of time talking up the performance of Qualcomm’s Snapdragon 8cx. It’s a 7nm system-on-a-chip that is capable of 40% faster CPU and 80% faster GPU performance than what users saw in the previously released Galaxy Book 2, according to Samsung. Like tablets and other mobile devices, the laptop is fanless and meant to run quiet.

Bizarrely, Samsung’s blog post about the new device almost directly copies language from one of Apple’s most famous advertising campaigns. It reads, “Built for the new achievers–the innovators, the go-getters, those who do things differently to push themselves forward–Galaxy Book S empowers the next generation of mobile moguls.”

Here’s to the crazy ones, the misfits, the rebels, the troublemakers, the round pegs in the square holes… the ones who see things differently—they’re not fond of rules… You can quote them, disagree with them, glorify or vilify them, but the only thing you can’t do is ignore them because they change things… they push the human race forward.

The borderline-plagiarism marketing copy isn’t the only thing that’s derivative here. Samsung positioned this product onstage as revolutionary, but it’s far from the first ARM laptop—there are a bunch of them for Windows users already. The cornerstone of the pitch seems to be the Snapdragon 8cx, which we’ll likely see in other devices, too. It might not be very innovative, but it’s nonetheless indicative of where a big chunk of the mobile computing industry is going.

Google Assistant gets a big note-taking revamp, with support for several apps

Enlarge / The Google Assistant and Google Keep, now back together. Shopping list creation can be a very handy feature to have in a voice assistant. As you pull the jug of milk out of the fridge and realize it’s a little light, just give a quick “Hey Google, add milk to my shopping list,” […]

Enlarge / This says “coming this fall” now, but it said something else earlier today. Apple Apple introduced two pricy and powerful pieces of pro-targeted hardware at its developer conference last month: the modular desktop tower Mac Pro, and the creative-focused Pro Display XDR. Although Apple said the devices would come this fall when discussing […]

Borderlands 3 comes to Steam on March 13