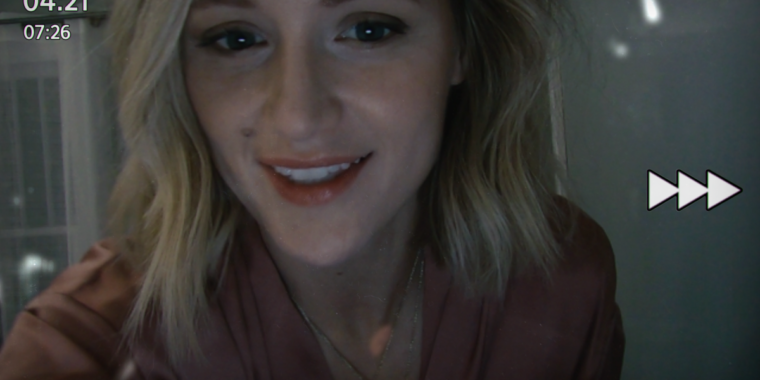 Four years ago, Sam Barlow surprised the game industry by reviving the moribund and seemingly outdated genre of full-motion-video games. Barlow’s Her Story was a well-made, gripping, and ambiguous tale of murder and mania, told exclusively via conversational video snippets that players could search through via deduced transcript keywords.

But Her Story was tight and focused to the point of practical claustrophobia; every scene involved one actress whose character was interrogated in a single, mostly empty room over the course of a few in-game days. Barlow’s latest FMV effort, Telling Lies, expands the same basic concept to great effect, packing many more characters, environments, and lengthy plotlines across roughly six hours of raw video and months of in-game time. The result is a slow-burning and deeply intimate character study with a plot that would feel cliché if not for its incredible presentation.

Like Her Story, the player interacts with Telling Lies by searching through a video database and watching the clips. This time, though, that database is sourced from an intelligence agency, apparently stolen by your “viewer” character Snowden-style before her access could be completely cut off. Right away, it’s apparent your goal is to search through the data before spreading it to the wider world. “When you use the uploader it will erase the hard-drive, so please do that before they take you into custody,” read a note that accompanies the USB drive containing the database. “(Which they will—you know this, right?)”

The game’s first suggested search—”LOVE”—brings up the in-game, per-search limit of five videos and quickly introduces you to some of the database’s few recurring characters (I’m being intentionally vague throughout this to avoid spoiling anything). Looking through these clips, you quickly figure out that you’re usually watching just one side of a Skype or Facetime-style video conversation.

The other half of that conversation might also be included elsewhere in the same search, or you may have to go digging for it separately by using a different search term and cross-referenced timestamps. Figuring out what words might unlock the unheard half of a conversation—or unearth new lines through the dozens of clips in the database—is, by and large, the extent of the “interactivity” in the game.

But searching semi-randomly through the database is more than just a cute little word puzzle. Viewing Telling Lies‘ story in this way lets the plot and character development unfold in unique and unexpected ways. You may search for a word or phrase expecting one specific clip, only to find that term repeated in a totally unexpected clip from a different character and time range altogether, unlocking a completely new plotline in the process.

You may start a clip thinking you know who’s on the other end but by the end discover that a formerly unknown character is part of the conversation. Or maybe you’ll stumble on a clip recorded months after the apparent start of the database, stumbling on the end of a plotline that makes little sense until you discover the motivation that was explained in another clip months earlier.

Look into my eyes

We’re used to stories that develop linearly, sometimes with telegraphed twists that throw everything before into question. In Telling Lies, though, you often experience the “twist” before the baseline assumptions it’s overthrowing, which ends up making you doubt almost everything. It can be a bit much to keep track of sometimes (I ended up with six pages of notes to remember when certain key events happened in the chronology), but knowing so much more than these characters about their eventual fates can make Telling Lies feel like “Dramatic Irony: The Game” at times.

Viewing the story in such a piecemeal fashion has a profound effect on its impact, too. Watching only one side of these video conversations means seeing a lot of awkward silences, where the person you’re watching is simply waiting and reacting to a monologue you can’t see or hear. You can use a limited fast-forward and rewind feature to scrub through this “dead space” in the conversation and get to the next subtitled bit of dialogue, but you probably won’t want to do that often.

That’s because the actors in Telling Lies, to a person, provide some incredible non-verbal performances to go with the tight script. Every twist of the mouth or raise of the eyebrow will grab your attention and make you wonder just what these characters are responding to (which you can piece together when viewing the other side later). You also end up staring directly and frequently into usually unbroken close-ups on these actors, providing an intimate, confidential connection with their characters that’s almost completely unique in the world of TV and film.

The basic story of Telling Lies could be told more directly and efficiently by just throwing all the one-sided conversations together in a split-screen and presenting them in chronological order. The result would be a well-acted but relatively rote six-hour mini-series, with a lot of heavily telegraphed plot points and an ending that borders on the cliché.

I’m sure someone will put together this kind of treatment for Telling Lies on YouTube shortly after its release. But experiencing the story that way will take away the sense of serendipitous discovery and non-linear storytelling that makes the game special. After you finally log out of the game’s stolen database, the journey and the characters you’ve studied so closely along the way will stick with you much longer than the events being recounted.

The Verdict: A well-presented story told in a fresh way. Buy it if you have any interest in new storytelling forms.

If you are waiting for the chance to bring together your Fortnite items from the PlayStation 4 version and the other versions together under one account, well you’re already used to waiting. Epic has delayed its account-merging tool, which it planned to launch before the end of November. Now, it is telling fans that it […]

Life Is Strange 2 Episode 1 and Episode 2 did a good job setting the stage for a dramatic tale about the bond between two brothers and what happens to them when a supernatural event shakes up their suburban lives. Now I’ve finished Episode 3, and I see we’re moving into a more intense story. […]

Enlarge / The intruders are… unpleasant. Awaken Realms Welcome to Ars Cardboard, our weekend look at tabletop games! Check out our complete board gaming coverage at cardboard.arstechnica.com. You’re roused early from cold sleep. The ship’s hibernatorium—and likely the remainder of the ship—is running on half power. There’s a body nearby. More accurately, there’s a body […]