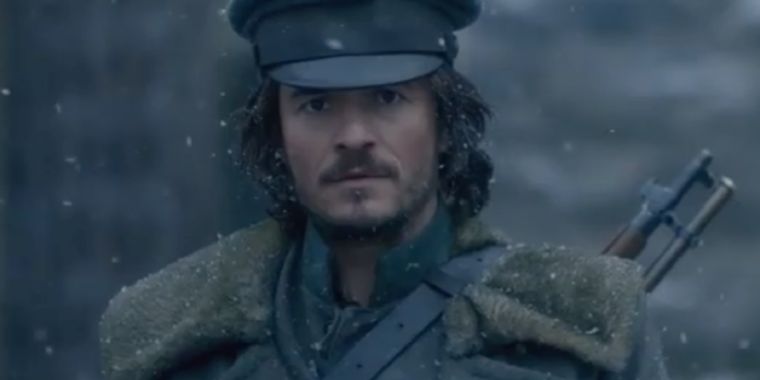 Mythical creatures fleeing their war-torn homeland live uneasily alongside humans in Carnival Row, the new “neo-Victorian noir” fantasy series from Amazon Prime, starring Orlando Bloom and Cara Delevingne and directed by Jon Amiel. Amazon must be excited about the series, because it has already ordered a second season. The studio just dropped the latest trailer, and visually, at least, it’s gorgeous and chock-full of sumptuous detail at a level rarely seen on streaming television.

Carnival Row is based on a feature film script by Travis Beacham when he was still in film school, some 17 years ago, and it made the infamous Hollywood Black List in 2005. Legendary Entertainment bought the script in 2015 and reimagined it as a series for Amazon Prime. Oscar-winning Director Guillermo del Toro was originally tapped to direct the series—the neo-Victorian setting and fantastical creatures would have been very well-suited to his idiosyncratic style. But del Toro left the project before production officially began to focus on his feature-film commitments. He was replaced by Paul McGuigan, who was in turn replaced by Amiel.

Judging from Beacham’s comments at San Diego Comic-Con last month, the budget for the series is significant. Some of that budget no doubt went toward the numerous reshoots—often a sign of trouble for a project—although Bloom called the reshoots “a gift” during the Comic-Con panel. Beacham agreed, per Deadline Hollywood:

The advantage of when you have a true series order like this is that you shoot all eight episodes, then you can go back and look at the whole and watch as well as we can watch. Are we setting up the things that pay off as well as we can set them up? It’s a function of the size of it and the scope of what we’ve been allowed to do. There’s stigma when it comes to reshoots, but increasingly in this world of peak TV, where shows are getting bigger and bigger, it becomes necessary.

Here’s the official synopsis: “Feared by humans, [these mythical creatures] are forbidden to live, love, or fly with freedom. But even in darkness, hope lives, as a human detective and a faerie rekindle a dangerous affair. The city’s uneasy peace collapses when a string of murders reveals a monster no one could imagine.” Or, as Comic Years put it, “Think Game of Thrones but with better technology and set in Narnia.” (The supporting class includes Indira Varma, who played Ellaria Sand in Game of Thrones, as well as Tamzin Merchant, who was the original Daenerys Targaryen in the failed pilot, before she was replaced by Emilia Clarke.)

The first trailer dropped last month, featuring a sonorous voiceover by Bloom’s Philo that mostly lays out more details of this fantastical brave new world. This is probably a wise move, given the complexity of the world-building here, particularly since Carnival Row is not tied to an existing franchise or an adaptation of a bestselling novel, which will make finding its audience more of a challenge. Philo explains that he is an orphan of the Burgue, where humans and other fantastic creatures (faeries, fauns, etc) used to live peacefully together, “until war changed everything.”

It was during his military service that he met and fell in love with the faerie Vignette (Cara Delevingne). The new regime didn’t take kindly to inter-species romance, and the lovers were forced to flee separately. Now, all the species have retreated to the Burgue, stoking what can only be described as anti-immigrant sentiment among the humans. Creatures are treated as subhuman, and Philo has vowed “to protect those that couldn’t protect themselves, whatever it took. For her.” Oh, and apparently some kind of darkness is coming.

This new trailer reinforces those elements of the story and fleshes out a few more details. We see Philo and Vignette meet for the first time, as well as their inevitable coupling and being torn apart. She believes Philo is dead and finds herself a refugee in the Burgue, working (it seems) as a ladies’ maid. She’s peeved when she learns he’s still alive and confronts him in his bed one night with a knife to his throat, demanding to know why he left her “in the ashes of my homeland.” She looks like she forgives him, though, and they start to rekindle the old flame.

Philo has a lot of other things on his mind, of course. He is now a police detective working to solve a string of heinous murders, and anti-immigrant sentiment among humans in the Burgue is on the rise. “Our streets are safe no more!” one pompous politician declares. And it looks like the culprit behind the murders might be something (or someone) completely different: “She was taken by something unnatural. Neither man nor fae.”

Bethesda restores characters who lost their clothes in Fallout 76 hack

A now-infamous video shows dozens of players having the clothes literally stolen off their backs as the result of a Fallout 76 hack last month. Last month, Fallout 76 saw the emergence of a damaging new hack that let attackers literally steal the clothes off other players’ backs. Now, Bethesda is making affected players whole […]

The Eliminator is coming to Forza Horizon 4. While that might sound like a 1980s vehicle-based TV action series, it’s actually the game’s new free battle royale. This is part of Microsoft’s continued efforts to support the open-world driving game with regular content drops. The Eliminator launches December 12. In this last-car-driving mode, up to […]

Mike Epstein/Digital Trends Microsoft is currently working on its next generation of game consoles, and it has been rumored that one of its new systems will not feature a disc drive. Now, the company appears to be close to making this a reality, as an all-digital Xbox One is reportedly coming next year. According to […]