Steam is still one of the better ways for developers to make money from their games. But with thousands of new releases hitting Valve Software’s PC gaming store each year, it can seem like that opportunity is dwindling. But that’s not the case for most games, according to a report from Valve. The company has found that more games are succeeding than ever on Steam.

Since “success” is different for every game, Valve looked at a number of different metrics. One measuring stick was the number of new games that earned at least $ 10,000 in their first two weeks. The count of games meeting this threshold jumped significantly from 2013 to 2014 after Valve opened Steam to more games with Steam Greenlight. Valve then opened the store even further with Steam Direct in 2017. And now, even more games are hitting $ 10,000 in their first two weeks. 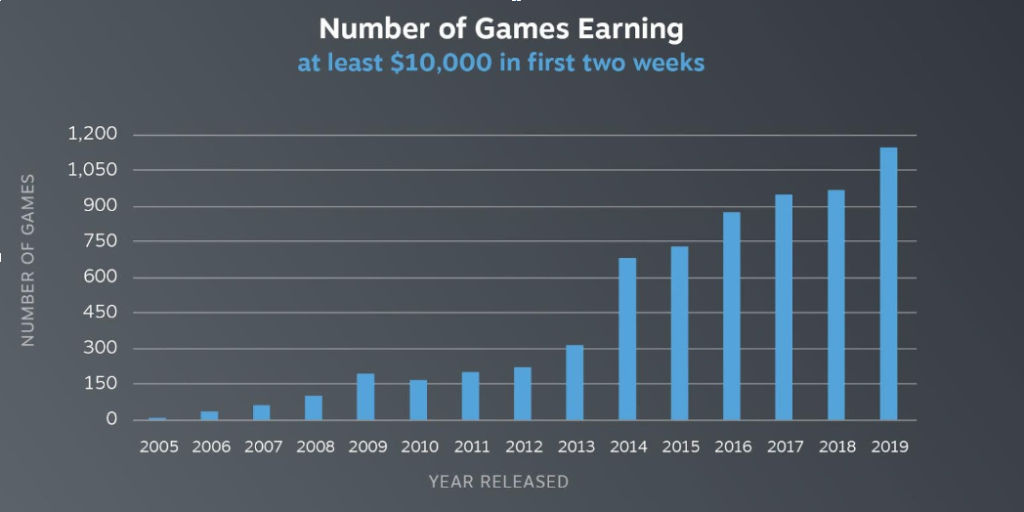 Valve’s hand curation of Steam was getting in the way

What this data suggests is that people are better at deciding what they want to buy than Valve is. 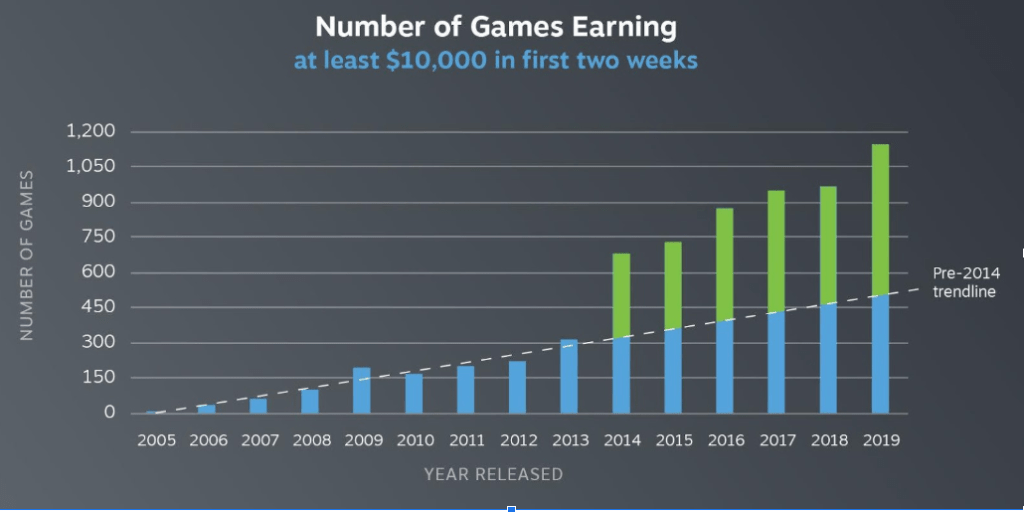 In the above chart, the dashed line represents the trend for games hitting $ 10,000 in their first two weeks before Steam Greenlight. The green parts of the bar estimate the number of games above that line.

“Assuming the trend was stable, it suggests that opening the platform more than doubled the number of releases meeting the $ 10,000 benchmark each year,” reads Valve’s blog. “While we can’t say for sure, we think the green portions of the bars above the dashed line are, largely, games that would never have previously found success on Steam because they never would have been released on the platform at all.”

By getting out of the way of who can access its marketplace, Steam is serving more developers and consumers than ever.

It makes sense that more games on Steam would mean a higher total number reaching certain sales thresholds. But Valve also found that most games are making more money. To test this, Valve looked at the median game for earnings. This is the game where half of new releases on Steam earned more and half earned less in their first two weeks. And initial revenue was up significantly for the median from 2018 to 2019.

“We found that the median game released in 2019 earned 24% more during its first two weeks of sales than the median release in 2018,” reads Valve’s blog.

Valve didn’t provide any insight into the reason behind this spending behavior. But it did promise to look into it.

“We want to make sure we aren’t standing in the way of games’ successes, so we plan to take a closer look at everything that contributed to these results,” reads Valve’s blog.

That lower 35% includes hundreds of games, and many of those potentially also deserve a chance at success. But even with some games still falling through the cracks, Valve’s point here is obvious: Steam is still the best place to put your games on PC if you want them to succeed.

Nintendo has finally brought its Mario Maker series to the Switch, and I’m loving it. In Super Mario Maker 2, creation is still so easy that anyone can do it. And it’s so much fun to play through your friends’ levels — even if they are sometimes cruel and unethical. But Super Mario Maker 2 […]

Enlarge / Riot and Twitch have partnered for a first-of-its-kind game-test giveaway. Its success is a good sign that we’ll see this gimmick happen again—and that is, surprisingly, good news. Riot / Sam Machkovech Why do I keep coming back to Valorant, a new online tactical-combat game from Riot? Most of my reasons can be […]

High school BFFs C.J. and Sebastian build a backpack to travel through time in the Spike Lee-produced See You Yesterday. Two teenaged science nerds in the Flatbush neighborhood of Brooklyn build a makeshift time machine to right a tragic wrong in See You Yesterday, a new film from Spike Lee’s 40 Acres and a Mule […]