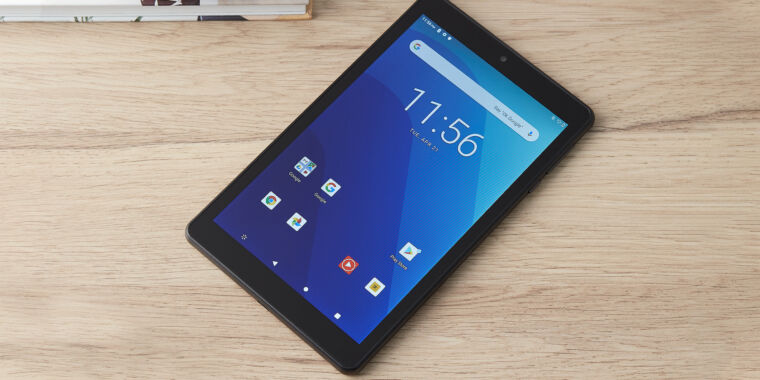 When you think of cheap Android tablets, you probably think of the Amazon Fire series, but Walmart is also in the game with its in-house “Onn” tablets. As spotted by 9to5Google, recently Walmart started selling two new models of its Onn tablet: the 8-inch “Onn.8 Tablet Pro” for $ 99, and the 10-inch “Onn.10.1 Tablet Pro” for $ 129. Surprisingly, we are not here to mock the $ 99 Walmart tablet, because it actually looks pretty good! You get Google Play, which is a major upgrade over the Google-less Amazon Fire tablets, plus Android 10, a shockingly-modern USB-C port, and an “HD” display.

Walmart is not great at this whole “selling electronics” thing and doesn’t list the usual official detailed stats. The 8-inch model’s “HD Display” could mean a resolution as low as 720p. Last year’s version of this device (this is the second generation) had a 1280×800 LCD, which would qualify for the “HD” tag and would be comparable to the closest Amazon device, the Fire HD 8 Plus.

The SoC is unhelpfully listed as a “2.0 GHz Octa-core processor” but an earlier leak pegged both tablets with a 2.0 GHz MediaTek “MT8768WA” SoC. The MT8768 features eight Cortex-A53 cores and a 650Mz PowerVR GE8320 GPU. The CPU cores are one of the first 64-bit cores ARM ever produced and were originally introduced in 2012. I can’t find detailed specs on this exact model, but other MT87xx SoCs, which also use Cortex A53 cores, are built on a 28nm process. So yeah, it’s cheap.

Interestingly, you’ll only find hits for “MT8768WA” in conjunction with these exact tablets. The normal Mediatek SoC is “MT8768.” So does the “WA” stand for “Walmart” and Mediatek did some light customization? Is this SoC literally a Walmart Special?

Other specs include 2GB of RAM, 32GB of storage, a headphone jack, MicroSD slot, USB-C port, and a “10-hour battery life” (sigh). There are front and back cameras, which both clock in at 5MP.

The skin is mostly stock Android, except for what looks like a super-annoying Walmart system navigation button. This opens a dedicated Walmart app portal featuring all your favorite apps like “Walmart, Walmart Grocery, Vudu, Sam’s Club & Walmart eBooks.” What’s worse is that, since this is a system navigation button, it pushes all the other navigation buttons to the side, so Home, Back, and Recents are all off-center. Since this is Android 10, though, I wonder what happens when you enable the new gesture navigation feature, which completely removes the system bar, other than a tiny gesture indicator. I bet it hides the Walmart button.

Walmart’s two tablets are for sale right now, and they might even be in your local Walmart.

Enlarge / The 2020 MacBook Air; this macOS update fixes a problem that could cause it to hang in Setup Assistant when the user disconnected and reconnected a 4K or 5K external display. Samuel Axon Earlier this week, Apple released updates for iPadOS and iOS to fix a bug that prevented devices running the latest […]

The Galaxy A51, Samsung’s $399 iPhone SE fighter, gets a wide US release

The Galaxy A51, obviously. Samsung For a midranger, this design is pretty great. It’s a huge screen with slim bezels. You could be forgiven for mistaking it for a flagship. Samsung The iPhone SE looks positively dated in comparison. Apple The A51’s back is plastic, not glass, and it really looks like this picture, with […]

Developers love Python and TypeScript, get paid for Clojure, and aren’t using blockchain

Stack Overflow’s annual developer survey was published this week, giving an insight into the skills, experience, and opinions of a wide slice of the developer community. Since its launch in 2008, Stack Overflow has become an essential developer tool, offering copy/paste solutions to an ever-growing number of programming problems. The Stack Overflow survey is particularly […]