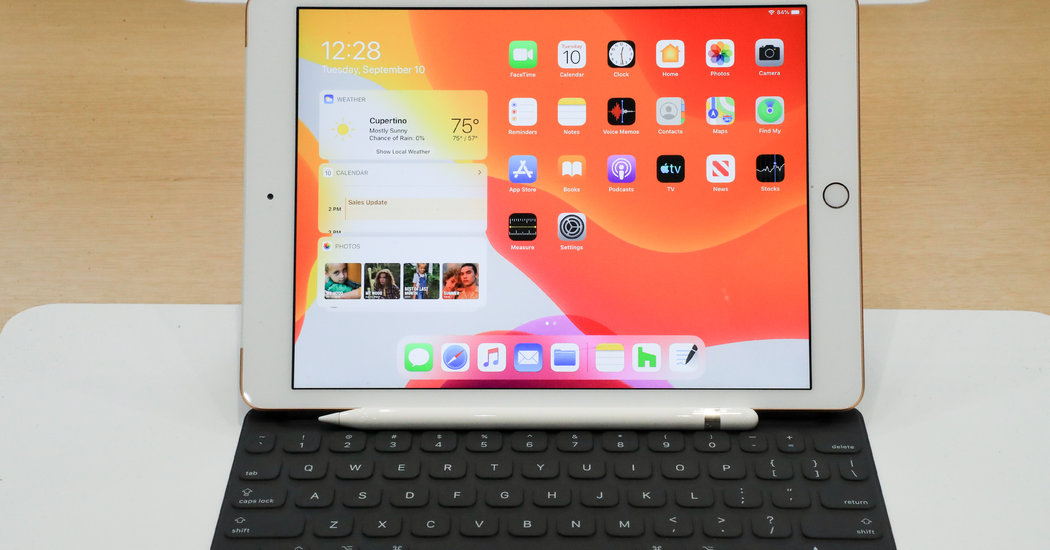 In a flatlining economy, the $ 399 iPhone that Apple introduced last week might sound attractive. But there’s a better gadget deal in the pandemic: the iPad.

Remember the iPad? You would be forgiven if you had forgotten.

Apple unveiled a new entry-level model of the tablet computer last year for $ 329. Yet it barely got a mention at the company’s glitzy product event in September, when Apple highlighted new iPhones that cost $ 699 to $ 1,099. The iPad, which always seemed like an optional accessory sitting between your computer and smartphone, has long been treated as that “other” device.

Now it’s time for us to reconsider the iPad. Last week, I wrote about how the coronavirus had revealed our most essential tech and weeded out the excess. The tech we have turned to over and over boils down to a computing device, communication tools, entertainment and an internet connection. The iPad delivers on all of those needs even better than a smartphone.

With a bigger screen than an iPhone, the iPad excels at videoconferencing with apps like FaceTime and Zoom, and it’s great for watching movies and programs on Netflix and YouTube. When you attach it to a good keyboard, it becomes an excellent budget computer with a zippy internet connection for browsing the web, writing emails and composing documents. All for half the price of a regular iPhone.

“It’s really in that sweet spot of being relatively affordable and having everything I think most people will need,” said Nick Guy, a writer for Wirecutter, a New York Times publication that tests products.

So even though Apple is releasing its new iPhone SE this week, with its sped-up internals and a better camera than its predecessor, now may not be the ideal time to buy one. After all, what good is an improved camera if you can’t leave the house?

It’s tough to recommend buying any tech in the coronavirus outbreak, actually. But if your gadgets are failing to fulfill your needs in any of the aforementioned areas and you have the money to spend, an iPad is one of the few products I can endorse for its practicality. (Apple declined to comment on this column.)

I picked up an iPad for a $ 100 discount last Black Friday. Over the past few weeks, it has been my go-to device. Here’s why I’m naming it the gadget of the pandemic.

I’ve never been much of a video chatterer, but the pandemic has forced just about all of us to use videoconferencing with the people we care about and work with.

Initially, I preferred doing video calls on my office-provided laptop because the screen angle could be adjusted. But after about a week, I realized that video calls on a laptop were a lousy experience. They are a power sucker; a half-hour call on Google Hangouts used 25 percent of my laptop battery.

What’s more, security researchers have found that Zoom, the most popular video chatting app, has major security vulnerabilities on computers but not on mobile devices like the iPad. That’s because mobile apps operate in a more restricted environment with limited access to your data.

This made me eventually shift all my video calls to the iPad, which was by far a better experience. The iPad has much longer battery life than a laptop. And compared with a smartphone, the tablet has a big screen for video calls and can easily be propped up with a protective cover.

My wife and I recently used an iPad for a two-hour FaceTime call with my brother-in-law while we played a video game together. At the end of the session, the iPad still had more than 70 percent of its battery remaining.

After I started doing video calls on the iPad, many of my work tasks also began shifting over to the tablet, including composing email, taking notes and even doing expenses. I appreciated the device’s prolonged battery life and preferred the way apps took up the full screen, which helped me concentrate on tasks.

Not all credit goes to the iPad alone. The gadget has only a virtual keyboard, and using it to type on a slab of glass is no fun.

Fortunately, I had researched several iPad keyboards before the pandemic and settled on the $ 100 Logitech Slim Folio keyboard, which was simple to attach. Typing on it feels the same as using a normal keyboard, and its case protects the tablet while propping it up.

I still do most of my writing on the laptop because the software is more suitable for multitasking. But I can do a surprising amount of my job on the tablet thanks in large part to finding the right keyboard.

I normally read lots of books, but lately I’ve been in the mood to shut off my brain by reading comics. The Comixology and Comic Zeal apps on the iPad make digital comics a better experience than reading in print: You can zoom in on individual panels, plus the screen is bright enough that you won’t need to turn on a reading lamp.

While I prefer watching video on a television screen, it has been nice to have an iPad to stream an HBO show while my wife is using the television to watch “Love Is Blind.”

I also now spend several hours a day watching YouTube videos about everything from baking to D.I.Y. home improvement. Thanks to this new obsession, I finally optimized homemade pizza dough, learned how to install a part in my motorcycle and even managed to install a bidet for my toilet. The iPad has been a great video-playing companion through this journey.

So why the iPad and not another tablet computer? After all, many of the same tasks can be done on cheaper tablets, like Amazon’s $ 50 Fire HD 8.

Yet those other devices are generally much slower and have inferior screens. The iPad is ultimately the best tablet on the market.

There are just two caveats, both of which add to the gadget’s price. The first is that a keyboard drives its cost up an extra $ 100. The second is that I recommend more storage (128 gigabytes instead of 32) to carry more apps and games, which adds another $ 100.

Don’t let that put you off. The iPad is still cheaper than most iPhone models and a better value than just so-so laptops from Lenovo, Dell and HP, which cost about $ 500.

Ryne Hager, an editor for the tech blog Android Police, said he bought an iPad for his girlfriend last Christmas and noticed that she was using it more frequently during the lockdown to video chat with her family. The device’s ease of use and value were so compelling that he broke the Android Police site’s tradition of writing exclusively about Android products and wrote an article about why people should buy an iPad for the pandemic.

“In a thousand little ways it offers a much better experience,” he said about the Apple tablet. “It’s kind of invaluable right now.”

Before Oracle billionaire Larry Ellison joined Tesla's board, he gave an impassioned defense of his 'very close friend' Elon Musk

Rep. Alexandria Ocasio-Cortez, whose mastery of social media has helped drive the national conversation and shed light on the inner workings of congressional power, has given up on the most popular social network in the world. In an interview Sunday with the Yahoo News podcast “Skullduggery,” the New York Democrat said she stopped using her […]

Insider Picks writes about products and services to help you navigate when shopping online. Insider Inc. receives a commission from our affiliate partners when you buy through our links, but our reporting and recommendations are always independent and objective. Apple Although the standard iPad is great for most people, the high-end iPad Pro is still […]

Is it time to delete TikTok? A guide to the rumors and the real privacy risks.

Apple will goose 5G sales in late 2020, but does anyone still care?

The 16-inch Apple MacBook Pro has never been cheaper