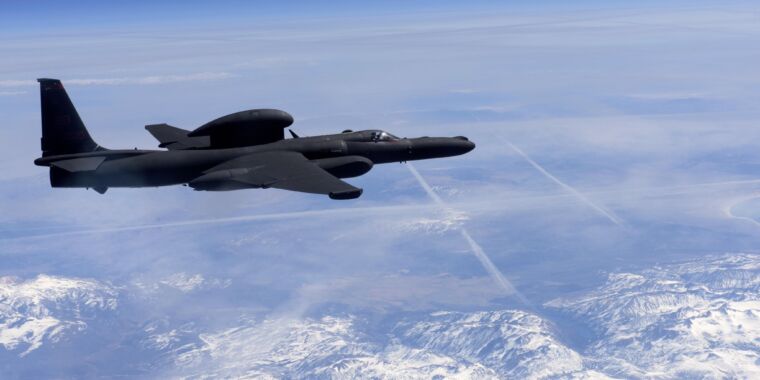 Earlier this month, US Air Force General James M. “Mike” Holmes acknowledged what many in the defense community and defense media already knew. Pilots of the venerable and iconic Lockheed U-2 Dragon Lady high altitude reconnaissance jet wear GPS-enabled Garmin smartwatches for navigation backup. General Holmes, who leads the Air Force’s Air Combat Command (ACC), was responding to a question about military communications system vulnerabilities at a conference in Washington, DC. And he opined that the Air Force should be able to use the wide variety of commercial communications paths available.

“My U-2 guys fly with a watch now that ties into GPS but also BeiDou and the Russian system and European system… so if someone jams GPS they still get the others,” Holmes said.

Indeed, U-2 pilots from the 99th Reconnaissance Squadron at Beale Air Force Base in Northern California have been flying with Garmin’s D2 Charlie smartwatches since late 2017, when the squadron acquired 100 of the watches, according to Garmin spokesperson Jessica Koss.

Though the tech media picked up Gen. Holmes’ comments, he was mistaken in saying that the watches can receive European Galileo and Chinese BeiDou satellite positioning signals. Air Combat Command tells Ars that the watches cannot receive BeiDou signals, and Garmin confirms that they can’t pick up Galileo signals, either.  The D2 Charlie can only receive GPS and Russian GLONASS position signals.

While the watches can’t get information from these other systems, ACC does acknowledge that they are “capable of receiving multiple navigation signals including GPS and GLONASS.” We’re not exactly sure what the other nav signals might be, but the D2 Charlie isn’t just a backup navigation device for U-2 pilots. It has other uses.

Garmin released the rechargeable D2 Charlie in July of 2017. It’s a big, chunky aviator smartwatch (51×17.5mm diameter case, 95g weight) that certainly feels like a tool on your wrist.

In that sense, it harks back to the origins of the wristwatch. After all, among the first wristwatch users were World War I pilots who fabricated straps for pocket watches that they then placed on their wrists over their cumbersome flying suits. Thanks to the U-2’s service ceiling of over 80,000 feet, its pilots have to wear pressure suits in the event of a cockpit pressurization failure. They, too, presumably wear the D2 Charlie over their apparel or mount it in the cockpit.

The watch is conspicuous, particularly if you have its full-color dynamic moving map, GPS navigation, or NEXRAD weather displayed. GPS-specific features include track, distance to the next waypoint, estimated time en-route, and direct-to course to any waypoint in your flight plan. The D2 also has the connectivity you expect from a smartwatch—text/email notifications and accelerometer-enabled biometric capabilities including heart rate, fitness tracking, activity profiles, and more. (It has also since been superseded by the D2 Delta, which adds a pulse oximeter for oxygen level awareness, among other improvements.)

Brian Plank, Garmin’s Team X software lead, says that the D2’s default navigation mode continuously compares American and Russian satellite position data. “The watch is always correlating the two signals and trying to give you the best fix. If GPS goes away, the GLONASS fix will be used,” Plank told us.

That’s why U-2 pilots could find it useful in GPS-denied (jammed) environments or when the Dragon Lady’s own avionics fail or are targeted by electronic warfare systems. Notably, the watch does not broadcast any signal itself, so it’s relatively secure as long as it’s not paired with a communication device like a phone or avionics. And Plank says Garmin designed the D2’s operating system entirely in-house; the same goes for the mobile apps and cyber security logic it uses.

If you’re interested in industrial control, you might take note of the fact that D2s are built in Garmin’s Taiwan factories and that its GPS/GLONASS receiver is sourced from Taiwan-based MediaTek, which provides chip-sets for a big swath of the smartphone/tablet market. A cyber exploit that allowed actors to access device apps and private data via MediaTek chips recently made news, but Garmin says the affected chips are not part of the D2 Charlie’s internals.

In late 2017, Lieutenant Colonel Matt Nussbaum, then commander of the 99th, told Defense News that his squadron had, on its own initiative, acquired tablets with navigation and datalink software as well as D2 Charlies. He pointed out that while contemporary U-2s have highly advanced sensors and datalinks, their secure architecture makes non-classified communication cumbersome.

“It’s very well equipped for a classified combat environment, it’s not well equipped to send a note to our recovery team’s cell phone,” he said. “So I can send lots and lots of data off our sensors, but I can’t ring up someone’s cellphone on the plane, and with this technology I can do that.”

It’s likely that Lt. Col. Nussbaum was talking about pairing the watches and tablets with pilots’ cellphones or other devices. The presence of other devices inside the U-2 cockpit may explain ACC’s contention that the D2s can receive “multiple navigation signals” including GPS/GLONASS. Ars asked both ACC and the 9th Reconnaissance Wing at Beale AFB specifically about these and other capabilities, but they declined to comment.

Lt. Col. Nussbaum also told Defense News that the squadron intended to collect flight profile and pilot physiological data from the watches. (How this works if the watches are worn on top of a pressure suit is not entirely clear.) The data would be translated to a military format to be downloaded for instruction and administrative purposes.

Garmin’s software lead says that flight activity and health data can be downloaded directly from the D2, although sharing it with the company’s Garmin-Connect mobile app yields deeper, trend-related data and insights. The 9th Reconnaissance Wing wouldn’t comment on how the data is used or if the practice continues, but it’s improbable, if not implausible, that the squadron does use the app.

If the benefits of the D2 as a navigational backup, communications aid, and ancillary data collector make sense to the U-2 community, it’s reasonable to assume that they’d appeal to other Air Force aircraft communities. To the question of whether other USAF squadrons/units have acquired smartwatches for similar purposes, Air Combat Command and Air Force Special Operations Command had no answer.

But given that the Navy formally acquired Garmin Fenix 3 smartwatches for its F/A-18 Hornet pilots in 2017 and that, in 2018, a Navy EA-18G Growler crew used a Garmin smartwatch to navigate back to base when its canopy iced-over and its avionics stopped working, it’s very likely that individual Air Force aircrews are wearing smartwatches of their own.