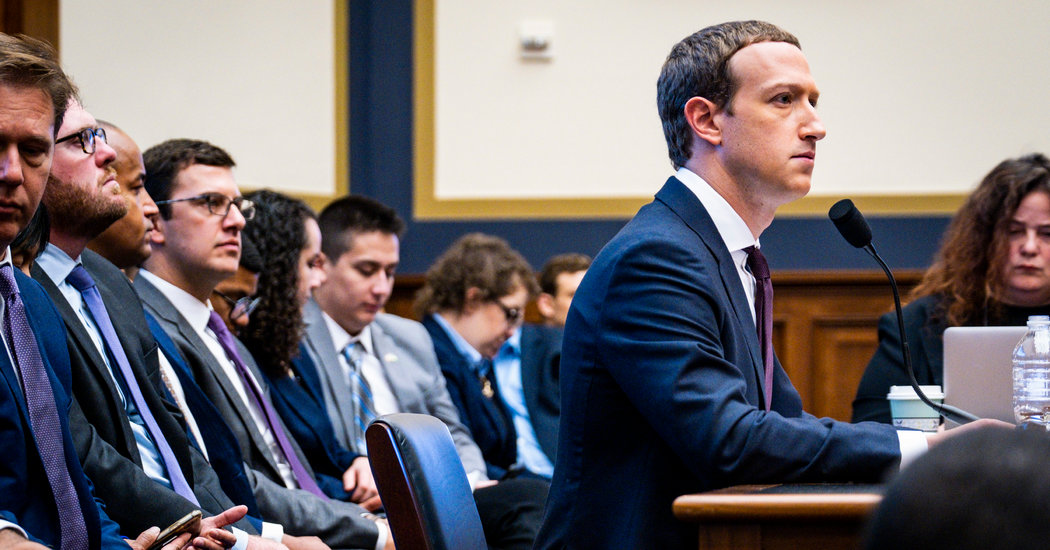 Some strategists voiced concerns to Facebook about how Google’s decision would affect it, said two people who talked to the company. They told Facebook that if it followed Google by limiting how political campaigns target audiences, it would hurt their ability to reach unregistered voters and make it tougher for smaller organizations to collect donations online, the people said.

The conversations added to the pressure on Facebook as it weighs how to handle political advertising. Mark Zuckerberg, the chief executive, has made it clear that Facebook will run all political ads — even if they contain lies — in the interest of free speech. But the social network is discussing some ad changes, like restricting how precisely campaigns can reach specific groups, said three people briefed by the company.

Facebook has made no final ruling on its political advertising guidelines, said the people, who declined to be identified because the discussions were confidential. On Thursday at a happy hour discussion with roughly 500 digital strategists, campaign officials and political operatives at Facebook’s offices in Washington, company executives were adamant that they would not make any news about political ads, said two people who attended the event.

But Facebook risks being whipsawed by its indecision, especially since Google and Twitter have already rolled out revised political advertising policies ahead of the 2020 American presidential election.

“Twitter fired the starting gun, and Google just cranked it up to 11,” said Eric Wilson, a Republican digital advertising strategist. “Now the pressure is on Facebook — they’re going to have to act.”

Political advertising on social media and internet platforms has become particularly fraught in this election cycle because of how campaigns increasingly rely on the digital channels to spread their messages and reach voters. Yet few companies are getting caught in that fray as much as Facebook.

On the one hand, the company wants to curtail the spread of disinformation across its site. At the same time, it wants to avoid alienating the groups and candidates who depend on its platform for fund-raising and organizing. So in trying to find a way to please everyone on the issue, Facebook has managed to please no one.

The social network has now become an outlier in how freely it lets political candidates and elected officials advertise on its platform. While Mr. Zuckerberg declared last month that Facebook would not police political ads, Twitter said it would ban all such ads because of their negative impact on civic discourse. On Wednesday, Google said it would no longer allow political ads to be directed to specific audiences based on people’s public voter records or political affiliations.

“As we’ve said, we are looking at different ways we might refine our approach to political ads,” a Facebook spokesman said in a statement.

The pressure on Facebook over what to do about political ad targeting has been unrelenting. Organizations on both sides of the political aisle — from as large as President Trump’s re-election campaign to smaller, grass-roots groups — have tried to persuade Facebook not to rein in the ad targeting.

“Making major changes to platform ad targeting would severely disadvantage Democrats and progressives who rely on Facebook for fund-raising and currently have a much smaller organic audience and current database of supporters to engage on and off the platform than Donald Trump,” said Tara McGowan, founder and chief executive of Acronym, a progressive nonprofit group.

The company has been contacting ad buyers and advocacy groups for feedback on what changes to political ads, if any, they could stomach. In one recent call with political advertising groups, Facebook said it was considering some tweaks, such as the possibility of raising the minimum number of people who could be targeted to 1,000 from 100, according to two people familiar with the discussion. The potential change was earlier reported by The Wall Street Journal.

Facebook also is updating and refining its advertising library, a collection of current and past ads that were paid for by political candidates, in an effort to increase transparency, the people said.

On Thursday at Facebook’s Washington event with digital strategists and campaign officials, executives ticked through their current ad policies for 90 minutes, before breaking for a question-and-answer period that lasted roughly 15 minutes.

Despite Facebook’s pledge that it would not announce any new ad policies, those in attendance tried to pry out some information, said two people who were there. One member of the Trump campaign asked if Facebook was considering eliminating certain data and the ability to reach specific audiences. Facebook said it welcomed all feedback and was considering all the issues.

Another questioner professed hope that Facebook would not follow in Google’s footsteps, said the attendees. Facebook officials reiterated that they would not be making any news.

When asked if the social network would treat Democrats and Republicans equally in the 2020 elections, though, Facebook officials were quick to respond.

Their answer: Yes, everyone will be treated the same, the attendees said.

Supported by Pinterest Is Said to File for I.P.O. By Erin Griffith Feb. 21, 2019 SAN FRANCISCO — Pinterest confidentially filed paperwork to go public, according to two people familiar with the decision, joining a stampede of high-profile start-ups heading toward the public markets. The company, which has an app and a website that allow […]

Chris Hughes Worked to Create Facebook. Now, He Is Working to Break It Up.

Chris Hughes used to huddle with Mark Zuckerberg in a Harvard dorm room building Facebook from scratch. Now, he’s huddling with regulators to explain why Facebook needs to be broken up. In recent weeks, Mr. Hughes has joined two leading antitrust academics, Scott Hemphill of New York University and Tim Wu of Columbia University, in […]