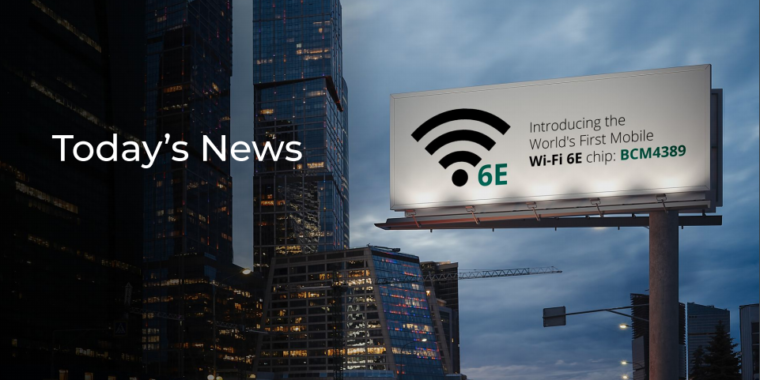 For those who aren’t immediately familiar with the latest bit of alphabet soup, Wi-Fi 6E isn’t a new protocol at all. Instead, it’s a branding name for 1200MHz of additional spectrum in the 6GHz range. The FCC hasn’t yet formally approved the public use of this spectrum, but its chairman Ajit Pai expressed a desire for the agency to “move quickly” in approving it in September. Broadcom’s decision to go ahead with designing and releasing actual hardware for use on the spectrum clearly strongly anticipates 6E becoming “a thing” sometime this year.

We’re going to spend a little time talking about why Wi-Fi 6E is important before diving into features specific to BCM4389 itself—which go well beyond a simple “connects to 6E if available.”

Frankly, the jury is still out on how great Wi-Fi 6 really is. Although the Broadcom VP we spoke to confidently stated that “OFDMA is working quite well on Broadcom chipsets, and the 4389 is no exception,” the vendor-unaffiliated RF engineers we’ve spoken to paint a different story. Even if Broadcom’s designs have 100% solid OFDMA, the majority of access points, phones, and laptops absolutely do not, as verified exhaustively by Tim Higgins at Smallnetbuilder.

Without OFDMA, Wi-Fi 6 is a bit of a pig in a poke. The protocol offers other features that aren’t in question—such as higher bitrate 1024QAM encoding for devices with very good connections—but OFDMA is the really killer feature that was supposed to make Wi-Fi 6 perform so much better and more consistently in crowded environments.

Wi-Fi 6E is in a much better position to show obvious, immediate, seat-of-the-pants improvements when it becomes available. Due to its use of 1200MHz of contiguous, uncongested 6GHz spectrum, it can offer seven non-overlapping 160MHz channels, as compared to 5GHz’s two-or-three-if-you’re-lucky 80MHz channels. This means much easier channel planning for enterprises and much less likelihood of being unavoidably congested by neighboring networks if you’re an urban apartment dweller.

In addition, the 160MHz channels really do mean double the available throughput—and the lack of legacy devices in the spectrum means no ancient, slow devices hogging up all the airtime. The slightly lower range and decreased throughput of 6GHz as compared to 5GHz—which Broadcom characterized as “roughly 10%-20% less range”—should also be viewed as a feature, not a bug.

Remember, decreased range and penetration doesn’t just mean “my router doesn’t reach as far”—it also means “my neighbors’ networks don’t mess with my network as much.” We are hopeful that widespread 6E adoption will ultimately mean the death of the enormously expensive standalone router and the final move to Wi-Fi mesh (or mesh-capable) APs for everyone.

For those of you trying to figure out in advance what the slightly decreased range and penetration means for you, we’ll have considerably more detailed recommendations soon in a feature dedicated to access point placement. (One really short rule of thumb—which hasn’t exactly changed from 5GHz, we just mean it extra serious now—is to plan for no more than two walls in between access point and station.)

As always, we caution readers to take vendor claims that haven’t been third-party verified yet with a grain of salt. But the technological improvements in the BCM4389 certainly look compelling.

A recent Broadcom chipset, the BCM4375, powers the Wi-Fi in Samsung’s S10 line of flagship phones. Although our own Ron Amadeo did not love the S10+ he tested, and neither of us is fond of Samsung’s software, I haven’t heard any complaints about either the Wi-Fi or the battery lifetime of the S10 line, so using that phone’s BCM4375 as a reference point for comparison with the new BCM4389 makes a lot of sense.

First up, power consumption should be drastically lower in the BCM4389. Broadcom’s process size shrank from 28nm to 16nm, which should result in a significant decrease in consumption all by itself. But more interestingly, Broadcom has added a new third radio to the new chipset.

The BCM4375 was capable of maintaining a Wi-Fi connection on both 2.4GHz and 5GHz bands simultaneously, and so is the new BCM4389. But it also has a third radio, with far lower power consumption than the other two, which can be used for background scanning (to see what Wi-Fi SSIDs are available, on which channels) and also to allow the main radios to sleep during periods of inactivity. The TBS radio can notice inbound communications and wake the appropriate big radio in time to receive them, without either big radio needing to waste power idling.

In addition to faster pairing times, Broadcom has added a new feature it has dubbed “BT MIMO” to its Bluetooth functionality, aimed at reducing the glitchiness users experience in technology-crowded environments. BT MIMO is a marketing term, not an established technical term, and it will probably seem a little misleading to many readers—it doesn’t refer to increasing bandwidth by using multiple spatial streams, like Wi-Fi SU-MIMO.

Broadcom’s BT MIMO is actually the use of beamforming transmit and MRC (Maximum-Ratio Combining) to improve connections and decrease operational latency for connected Bluetooth devices. The company says that by directionally isolating the signals this way, instances of audio skipping and pausing due to the presence of many other active Bluetooth devices will decrease. BT MIMO does not require any particular feature support from connected devices; it operates entirely in the phone chipset itself.

We don’t have a BCM4389 to test BT MIMO with, but we suspect it will fall in the category of “nice to have, but not a magic wand.” The described spatial isolation should help increase the signal-to-noise ratio significantly, but it won’t magically make CMDA/TDMA multiplexing issues go away when the competing devices are close enough to be received as Bluetooth transmissions by the phone or headset itself. So this is likely to be more of a feature for reducing the impact of long-range noise rather than dealing with nearby crowding.

Last but not least, BCM4389 of course brings Wi-Fi 6E support to the table. There isn’t an extra radio for use with the 6GHz spectrum; the same radio does double-duty for either 5GHz or 6GHz connections—so although a BCM4389-equipped phone can be simultaneously connected to one 2.4GHz network as well as a 5GHz or 6GHz network, it cannot connect to both 5GHz and 6GHz simultaneously.

Assuming, of course, that use of the 6GHz spectrum is ratified, we expect new models of virtual reality headsets designed to pair with phones or tablets to adopt 6E quite rapidly. The new spectrum’s combination of high throughput, low latency, and low range and penetration (and thus low congestion) are pretty much ideal for this kind of connection.

Enlarge / The Snapdragon 865. Today, Qualcomm detailed its new flagship SoC for 2020: the Snapdragon 865. This is going to be the chip that ships in every single high-end Android phone that comes out in 2020, and there’s a lot to go over. First up: we’re getting the usual modest speed increases that Qualcomm […]

The new Ring Stick Up Cam. Amazon The Ring Indoor Cam. It looks a lot like the Stick Up Cam, just smaller and meant for inside the home. The Ring Fetch. It’ll use Amazon’s new Sidewalk network and keep tabs on your dog. Alongside the deluge of Echo devices Amazon announced during its autumn hardware […]

The best games for couples to play together

How to transfer contacts between iPhone and Android devices