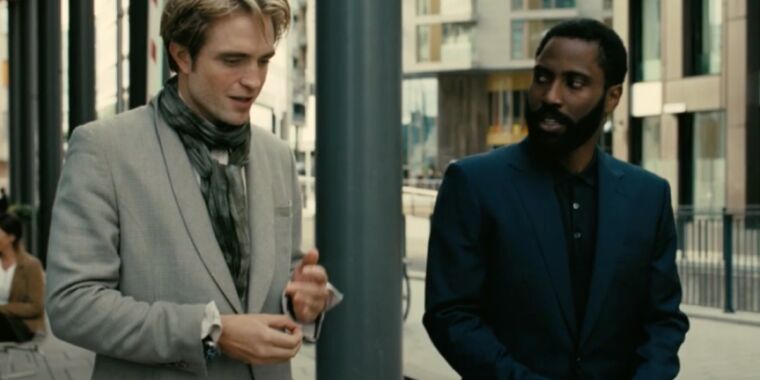 With cinemas shut down all over the world for months, all eyes have turned to July, when two major studio releases are set to debut: Disney’s Mulan (bumped from its original March release), and Director Christopher Nolan’s highly anticipated sci-fi thriller, Tenet. It looks like Warner Bros. is boldly sticking with the latter film’s planned July 17 release date, despite all the pandemic-fueled uncertainty. The studio just dropped a new trailer, which made its debut in an unusual medium: playing every top of the hour in the popular battle royale game Fortnite.

The first trailer dropped last December. As I wrote at the time, “Fresh off his Oscar-nominated World War II drama, Dunkirk, Nolan seems to be returning to his high-concept sci-fi roots with Tenet.” That trailer opened with a shot of two men rappelling up a building, in seeming defiance of the laws of physics. “We all believe we’d run into the burning building,” a voiceover tells us. “But until we feel that heat, we can never know.”

Here’s what we know so far. A man (Washington) undergoes what appears to be a grueling trial to join an elite international team of spies, ending with a choice: give up his colleagues, or die. He chooses death and wakes up in a hospital to learn he has passed the test. The man’s new assignment: prevent World War III and save the world—not from nuclear holocaust, but from “something worse.” He’s given one code word, “tenet,” to open the necessary doors.

If you were hoping for a little more information, count those hopes dashed. This latest trailer has plenty of action and excitement as well as lots of new footage—including a lot more Pattinson—but not much in the way of revelatory details. “He can communicate with the future,” we hear one man say, presumably referring to Washington’s character. But it’s not time travel, exactly—more like “inversion.”

We do learn a little bit more about the strange artifact briefly glimpsed in the first trailer. When Washington shoots at it, the bullets are absorbed. “You’re not shooting the bullet—you’re catching it,” Poésy’s scientist tells him. There are people in the future who need “tenet,” we are told, and it looks like they might be saved “in the here and now” by reversing the flow of time. But there are bound to be some mind-boggling consequences to doing that. All in all, it looks very Christopher Nolan, and here’s hoping enough theaters reopen in time for its release.

Ubisoft has turned its competitive shooter Rainbow Six: Siege into a reliable moneymaker. And in 2019, it plans to continue growing the online game. To that end, the publisher has begun selling the Year 4 pass for Siege. This $ 30 content pass guarantees access to the eight new characters Ubisoft will launch in 2018 […]

In a golden age of SXSW brand activations, at least Game of Thrones draws blood

Uh, I’m here to donate blood? Nathan Mattise Can all future blood drives take place in recreations of the King’s Landing castle? Nathan Mattise After donating, visitors are ushered towards the “immersive experience,” which guides GoT fans through the tales of four people who “bled for the Throne.” Nathan Mattise So we’re talking Arya, Cersei, […]

Wasteland 3: Even the apocalypse can’t kill the One Percent

Jeremy Kopman joined InXile Entertainment during what I consider the most exciting time in its history — the crowdfunding chapter. He signed on shortly after the Kickstarter campaign for Wasteland 2, working on another game that the indie RPG publisher would ask its players to help fund — Torment: Tides of Numenera. He’s now working […]