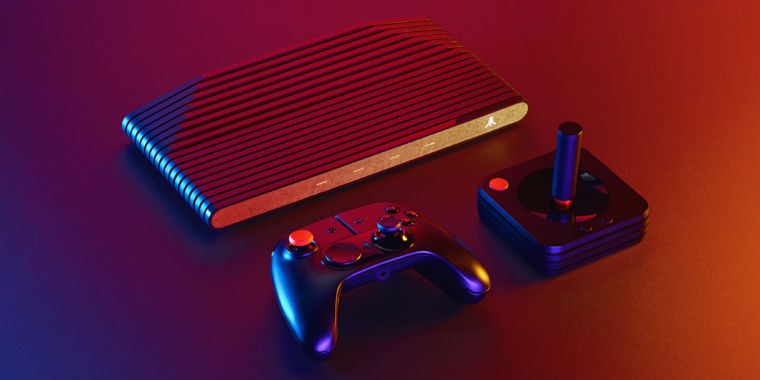 Rob Wyatt, perhaps best known as the system architect on Microsoft’s original Xbox, has filed a lawsuit against Atari Gamebox LLC. The suit, filed in a federal court in Colorado, alleges that the company has failed to pay Wyatt and his firm Tin Giant nearly $ 262,000 invoiced for work on the long-delayed Atari VCS microconsole.

The project now known as the Atari VCS was first announced as Ataribox back in 2017, and it was originally targeting a spring 2018 launch. But despite a $ 3 million IndieGogo campaign in 2018, Atari’s hybrid PC/microconsole has since limped through production pauses and delays over the months. Most recently, the company wrote that supply chain issues caused by the coronavirus pandemic may delay a planned March 2020 rollout to initial backers and pre-orderers.

Wyatt says in his lawsuit that he and Tin Giant have been unfairly defamed as “scapegoats” for these development troubles to the press. “The fact that Atari’s Console Project was or is delayed has nothing to do with the quality of Tin Giant’s work but is the fault of Atari’s own mismanagement of the Console Project,” Wyatt alleges in his suit. “The architecture being used by Atari on the Console Project is exactly what Plaintiffs designed under the Agreement.”

The long and winding road

Wyatt was present when Ars got a glimpse of VCS hardware models and interface mock-ups at an E3 2019 demo, which went a long way to convincing us the project might not end up as total vaporware. Wyatt was enthusiastic about the Linux-based project during that demo, telling Ars that Atari was aiming to create “a box where you can develop an app for the living room… We want to be the Raspberry Pi of the living room.”

By October, though, Wyatt had left the company in acrimony. In an interview with The Register at the time, he alleged those same unpaid invoices forced him to “pursue other opportunities,” such as Kickstarter. Wyatt also alleged at the time that the mismanaged Atari VCS project might never see the light of day.

The company currently known as Atari bears very little relationship to the company responsible for lines of game consoles and computers from the ’70s through the ’90s. The current incarnation’s messy corporate lineage can be traced back to French game publisher Infogrames, which acquired the rights to the name in the late ’90s through a chain of acquisitions.

Wyatt’s complaint echoes that of Feargal Mac Conuladh, who served as the first General Manager for the “Atari Gamebox” project. In 2018, Mac Conuladh left Atari and sued the company for breach of contract over unpaid crowdfunding bonuses. The case was later settled out of court.

Atari representatives weren’t immediately available to comment on Wyatt’s suit. But the company has in recent months posted photos of prototype boards and factory manufacturing shots in an attempt to prove that production is finally moving along.

But there are still questions about what kind of content will be available for the Atari VCS if and when it does finally ship to early adopters. In September, Atari announced an exclusive partnership with retro-focused streaming company AntStream to bring hundreds of classic games to the platform via the cloud. And in December, the company said developers would get anywhere from an 80 to 88 percent royalty on all software sold in the Atari VCS digital store, depending on exclusivity.

In November, Atari COO Michael Arzt promised that the hardware would fully support the Unity Engine and said there are “several studios lined up for the VCS launch window.” But he also said the initial OS and software for IndieGogo backers would be in “early access” on day one and still need “early feedback from a heavily engaged and invested community of passionate users prior to our official launch.”

At this point, we’ll be somewhat impressed if and when the new Atari VCS even gets to that day one.

Everything Riot announced for League of Legends’ 10th anniversary

Later this month, League of Legends turns 10 years old. That makes it a retro game, but developer Riot Games is not sitting around getting all nostalgic. Instead, the studio has multiple major new initiatives in the works. During a livestream to celebrate League’s big anniversary, Riot finally revealed some of those other projects. We’ve […]

Take-Two Interactive Software’s indie-publishing label Private Division is opening a new studio in the Seattle area. The company plans for this team to work exclusively on rocket-launching simulator Kerbal Space Program 2. Private Division announced the Kerbal sequel at the Gamescom fan event in August. At that time, studio Star Theory was in charge of […]